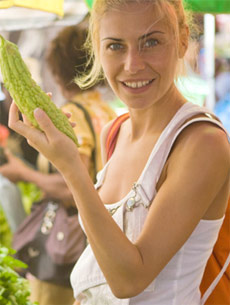 (Ivanhoe Newswire) — A team of scientists at the University of Massachusetts Medical School have found substances that give some foods their bitter flavors can also act to reverse the contraction of airway cells. This reversal, known as bronchodilation, is needed to treat airway obstructive diseases such as asthma and chronic obstructive pulmonary disease.

The sense of taste is mediated by taste receptor cells bundled in our taste buds. These receptors were thought to only exist in the tongue, but recent discoveries have shown that they are actually expressed in various cell types throughout the body. In particular, bitter taste receptors exist in smooth muscle cells in the airway, acting to relax the cells when exposed to bitter-tasting substances.

A hallmark of an asthma attack is excessive contraction of these smooth muscle cells, which causes narrowing of the airways and breathing difficulties. The fact that bitter substances can relax these smooth muscle cells suggests that they may have the potential to halt asthma attacks, and in fact could even be an improvement over current treatments since the relaxation effects are quite fast. Indeed, experiments in mice suggest that the effects are stronger.

However, the mechanisms through which bitter taste receptor activation leads to cell relaxation were unknown. To help unravel these mechanisms, Dr. Ronghua ZhuGe and his colleagues examined the effect of bitter substances on the contraction of airways and in single isolated cells.

During an asthma attack, membrane channels on smooth muscle cells in the airways are opened, allowing calcium to flow into the cell and causing the cell to contract. This leads to the airways becoming narrower, and making breathing more difficult. Dr. ZhuGe and colleagues determined that bitter substances shut down these calcium channels, allowing bronchodilation.

“With this new understanding of how bitter substances are able to relax airways, we can focus our attention on studying these receptors and on finding even more potent bitter compounds with the potential to be used therapeutically to end asthma attacks,” Dr. ZhuGe was quoted as saying.