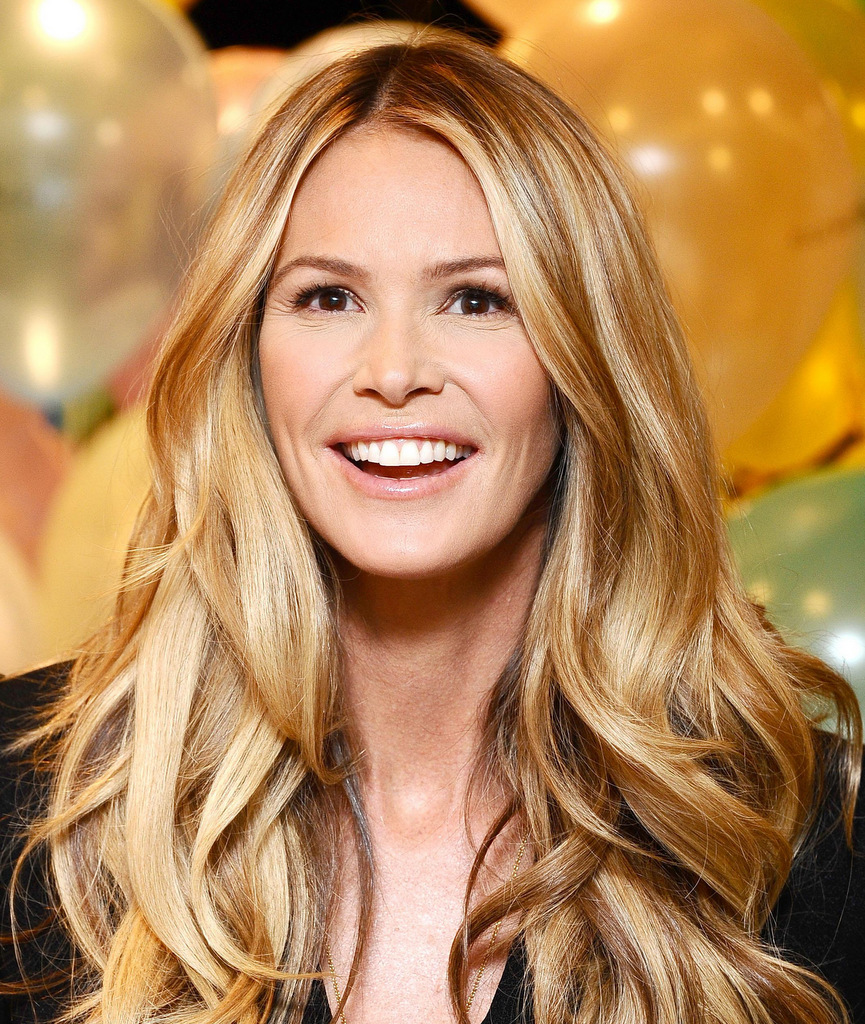 Elle MacPherson: Elle Macpherson is an Australian businesswoman, television host, model, and actress. She is well known for her record five cover appearances for the Sports Illustrated Swimsuit Issue beginning in the 1980s, leading to her nickname “The Body”. She is also known as the founder primary model and creative director for a series of business ventures, including Elle Macpherson Intimates, a lingerie line, and The Body, a line of skin care products.
In 2010, she became the host and executive producer of Britain & Ireland’s Next Top Model. She is currently the host and an executive producer NBC’s Fashion Star.

Your Personal Best Workout With Elle MacPherson was patterned after Making of the Sports Illustrated Swimsuit Issue, but the workout is challenging, fun, and easy to follow. Fitness pro Karen Voight leads an upbeat routine that alternates between aerobics and body sculpting. Macpherson is little more than window dressing, but with her perfect body, Julia Roberts smile, and childlike enthusiasm, this 56-minute session flies by.

Supermodel Elle Macpherson may be a Fashion Star on the new show she hosts and executive produces (premiering Tuesday, March 13 on NBC), but to us, she’ll always be a fitness star!

After all, the 6-foot-tall stunner is nicknamed “The Body” for a reason. With curves in all the right places and long, lean legs that seem to go on for miles, it’s safe to say the 5-time Sports Illustrated cover girl has one ah-may-zing bod.

But we admit. It’s easy to assume Macpherson’s famous physique is the result of hours upon hours of intense daily workouts and some serious calorie cutting. Well, here’s the good news—according to her superstar trainer James Duigan, that’s not the case!

“My approach doesn’t involve calorie-counting or spending hours in the gym. Rather, it’s creating a way of life,” Duigan says. “Exercise is there to make you feel better, but to be constantly exhausted and tired is not what it’s about.”

Duigan, who has trained the 47-year-old beautiful Aussie for the last 15 years, has designed a metabolic program that can be done in as little as 20 minutes. Knowing most of us have very busy lives, his program is devised of a series of resistance exercises to burn fat and calories, improve posture, and increase strength without having to put your body through unnecessary stress, or worse—burning out.

Combined with an organic, natural, and very simple approach to eating with lots of green veggies, fruits, and lean meats, “you’ll always feel empowered and good about yourself. You’ll never feel hungry and you’ll actually be having fun!” Duigan says.

“My motto is work smarter, not harder! Elle is one of the busiest people I know. We do what we can, when we can. Sometimes that will be 20 minutes a day, other times it will be an hour-long session. She’s not obsessive about it.”

For Macpherson, with two boys, a new show, and several other successful businesses to run, it’s clear she has a very organic approach to her health. The key, says Duigan, is all about balance… in a non-gimmicky, straightforward way.

“Take up some tennis, swimming, or surfing lessons,” he says. “Do something to add value to your life. You’re never going to look back and say, ‘if only I had more time on that treadmill in my basement.’ If you have a healthy relationship with food and exercise, the results you want will come.”

There’s no question we are lovin’ that philosophy! For a sneak peek at Duigan’s fabulous 20-minute.Macpherson has received a number of awards recognizing her business acumen and the success of Elle Macpherson Intimates. In 2005, she was named Glamour Magazine’s Entrepreneur of the Year; in 2007, she received an Everywoman Ambassador Award recognizing her success as a businesswoman; in 2008, the Underfashion Club’s Femmy Awards crowned her Lingerie Designer of the Year; in 2009, she received a World Career Award from the Women’s World Awards.In July 2010, Macpherson became the new host of Britain and Ireland’s Next Top Model, taking over from Lisa Snowdon. She also serves as executive producer on the show. The revamped show’s panelists now include OBE-winning fashion designer Julien Macdonald, designer Whitney Port and male model Tyson Beckford.

Macpherson travelled to New York City, where she initially signed up with Click Model Management.Macpherson’s modelling career began in 1982 with a television commercial for Tab which established her as a “girl next door” figure in Australia. By 1986, Time magazine had already put her on the cover (with a feature entitled “The Big Elle”). By that time, she had also appeared on the covers of Cosmopolitan, Elle, GQ, Harper’s Bazaar, Vogue, and Playboy.

Macpherson cemented her high profile through frequent appearances in Elle, where she appeared in every issue for six straight years. During that time, at the age of 21, she married Gilles Bensimon, the creative director of Elle.

Eventually she gained even more exposure through Sports Illustrated magazine’s annual Swimsuit Issue. She appeared on the cover a record five times: 1986, 1987, 1988, 1994, and 2006. Along with Naomi Campbell, she co-hosted the Miss Universe 2001 pageant. Her popularity had reached such a level that Australian government offered her a position on its tourist commission as an unofficial ambassador. Macpherson returned to the runway in 2010 to close the fall Louis Vuitton show for Marc Jacobs in Paris.