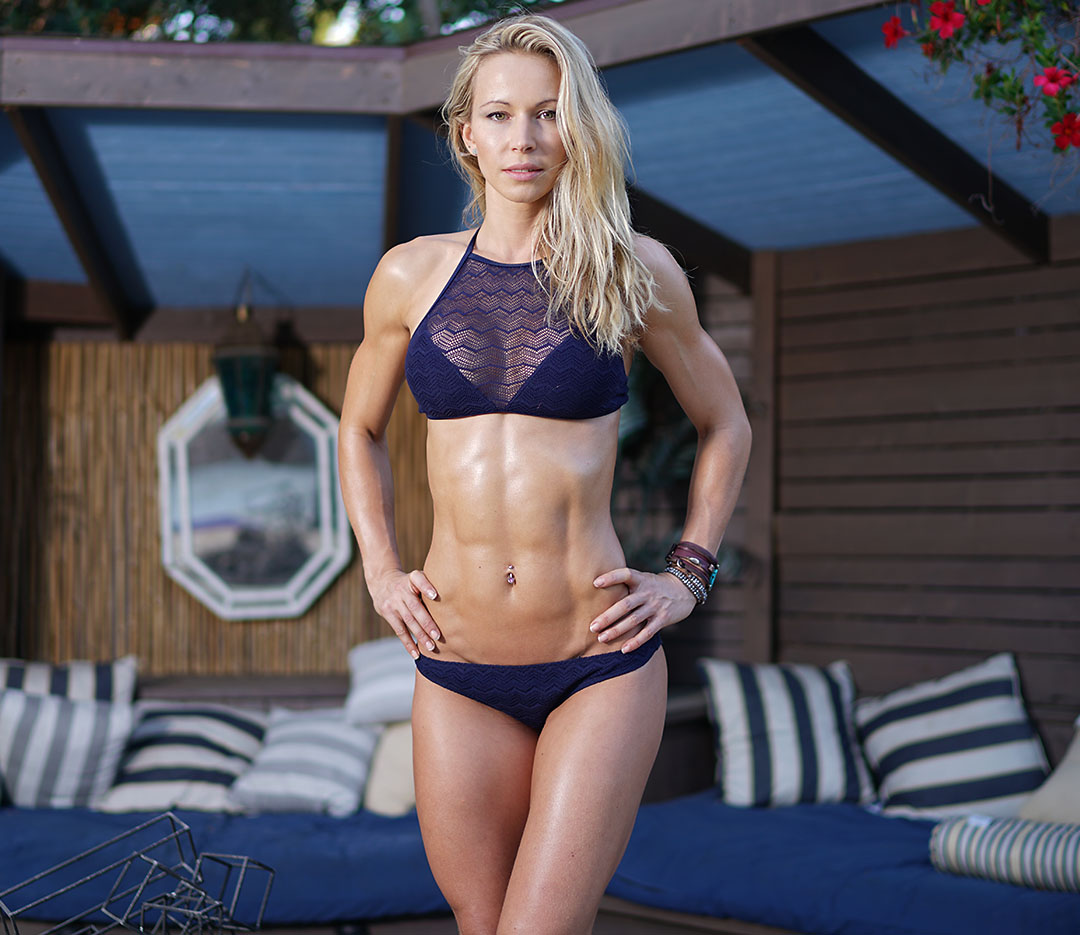 Zuzana, an incredibly fit and gorgeous Czech woman, is filmed and photographed by her boyfriend Freddy whilst performing a variety of different exercises and cooking demonstrations. The filmography and techniques, however, are definitely not what you remember from your Jane Fonda VHS days. Sure we all snickered as Jane and Co. tightened their buns while pelvic thrusting or when Suzanne Sommers made the crotch shot a late night staple with her Thighmaster infomercials but Bodyrock.tv takes it to a whole new level. Videos often start with a shot of Zuzana’s ample cleavage on display and then zoom out to show the food. Workout moves are illustrated by pictures of her wearing a sports bra half on/half off and a miniskirt.

I’ll admit to a love-hate with the site. As a woman in the fitness industry, it bothered me that sex was the main selling point and a mostly unclothed female body was the main advertisement. I prefer to tout exercise as a way to better physical, mental and spiritual health. Bor-RING, I know. But women’s bodies can do a variety of amazing feats and the sexual ones have been pretty well covered, I think.

Zuzana is no mere sex toy bopping around the studio in legwarmers, though – girl gets crazy sweaty and has sculpted muscles that are the envy of any fitness competitor. She is serious about her workouts and her health. She works really hard and has earned all her accolades. I have to respect that.

” It is a trap that a lot of young girls in eastern Europe fall into and I feel very lucky to have survived the experience, because many girls don’t. When you see these girls in the pictures smiling almost like they are happy having their clothes off and being exposed like this – it is the biggest lie of all. I have never met a single girl who was happy to be doing that job. Contrary to popular belief these girls don’t make a lot money doing this and they end up broken inside and left with no self-confidence or feelings of self worth. Many of them turn to drugs and alcohol to help numb the pain.”

Even worse, Zuzana adds, is that the system is set up that way on purpose.

“The only people who benefit from the wreckage of all these lives are the photographers and the multinational corporations like visa and mastercard who pocket money every time images of one of these girls is sold online.”

After breaking free of the industry that she says almost killed her, she has overcome her past feelings of guilt, despair and shame – common to all victims of sex crimes – to create a life ” full of love and happiness.” She’d adds, ” I have a dream about doing something to help stop the cycle of exploitation that feeds on these young girls and destroys their lives.”

While I don’t plan on filming my next exercise movie in a tiny tube top or storing my interval timer in my cleavage a la Zuzana (how does it not get ruined from the sweat? Am I the only girl with seriously sweaty cleavage??) her message of strength, resilience and living life on her own terms is one I can definitely get behind. No more waffling for me: I love her. I hope she accomplishes her dream.

A girl like Zuzana makes us ask the important questions in life, like: Can a woman be too ripped? The answer is yes, of course, they can. Once you cross that line, there’s no going back. Zuzana lives on this line.

Even though she’s straight granite and has the arms of a UFC fighter, there is something about Zuzana’s athletic determination and accent that makes us dig this chick. (We’re also sexual deviants, so that probably plays a part in it somewhere.)