Today all leading Hollywood actresses, music performers and singers in the world cannot discount the presence of Mexican successful women among them. Their native sharp features and skin colour has attracted the people worldwide. Today Women Fitness presents the list of Top 10 Hottest Mexican women on the planet in no order of preference. We are also unable to include ‘n’ number of Mexican women who deserve to be there but due to the list size constraint could not be included but are the Mexican beauty to recon with. 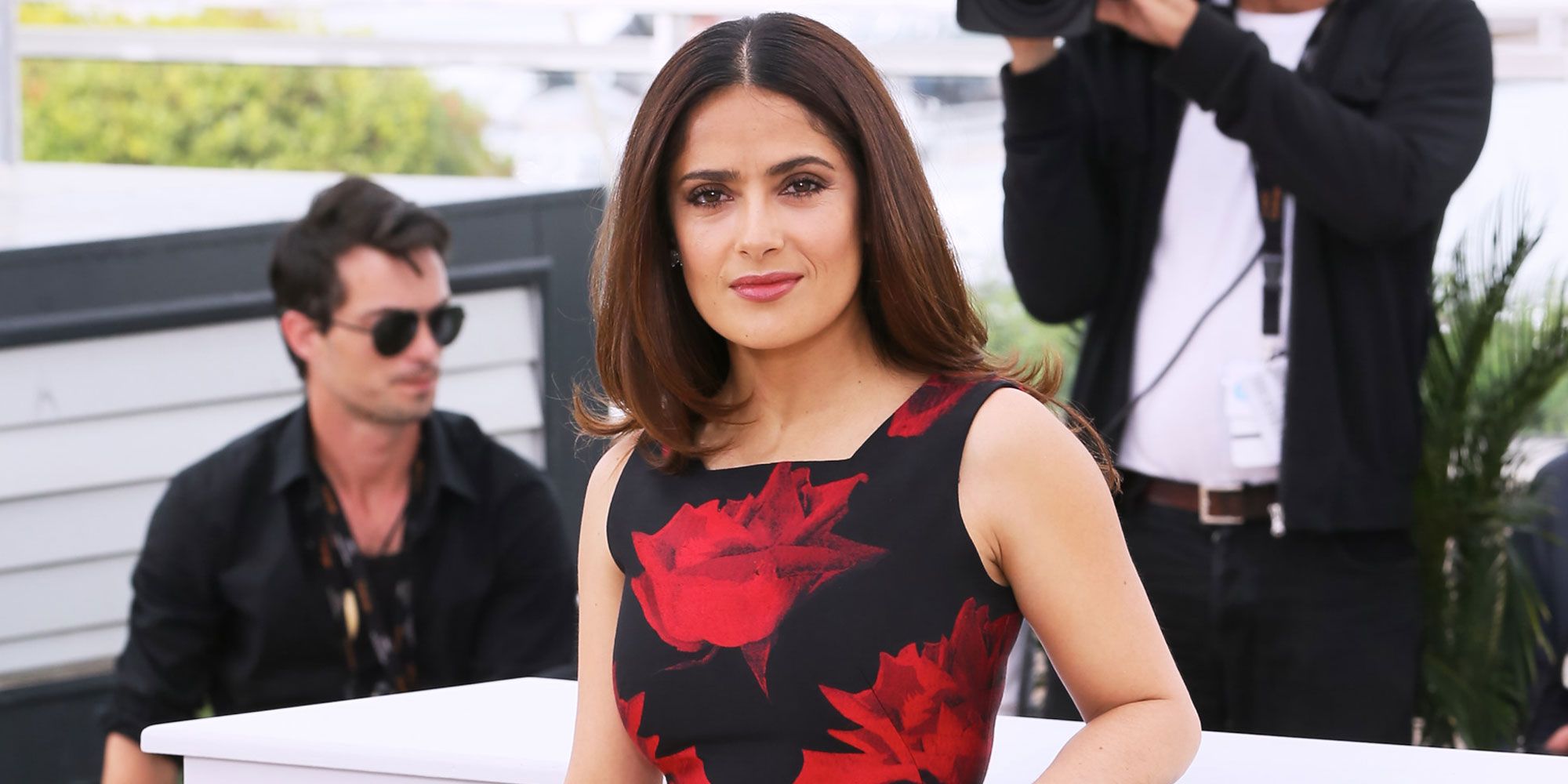 Salma Hayek Jiménez was born on 2nd September 1966. She is a Mexican and American film actress, director and producer. She began her career in Mexico starring in the telenovela Teresa and went on to star in the film El Callejón de los Milagros (Miracle Alley) for which she was nominated for an Ariel Award. In 1991 Hayek moved to Hollywood and came to prominence with roles in Hollywood movies such as Desperado, Dogma, and Wild Wild West.

Her breakthrough role was in the 2002 film Frida as Frida Kahlo which she received an Academy Award, BAFTA Award, Screen Actors Guild Award and Golden Globe Award nomination for Best Actress. The movie received widespread attention and was a critical and commercial success. She won a Daytime Emmy Award for Outstanding Directing in a Children/Youth/Family Special in 2004 for The Maldonado Miracle and received an Emmy Award nomination for Outstanding Guest Actress in a Comedy Series in 2007 after guest-starring in the ABC television series Ugly Betty. She also guest-starred on the NBC comedy series 30 Rock from 2009 to 2013.
Hayek’s recent films include Grown Ups and Grown Ups 2, acting alongside Adam Sandler, and Puss in Boots, which also features former collaborator Antonio Banderas, wherein she is the voice of the character ‘Kitty Softpaws’.

Hayek was born Salma Hayek Jiménez in Coatzacoalcos, Veracruz, Mexico. Her younger brother Sami (born 1972) is a furniture designer. She is the daughter of Diana Jiménez Medina, an opera singer and talent scout. Her father Sami Hayek Dominguez—who once ran for mayor of Coatzacoalcos—was either an oil company executive, or the owner of an industrial-equipment firm.

Hayek’s father is of Lebanese descent, and she also has Spanish ancestry. Her first given name, Salma, is Arabic for “safe”. Raised in a wealthy, devout Roman Catholic family, she was sent to the Academy of the Sacred Heart in Grand Coteau, Louisiana USA, at the age of twelve. While there, she was diagnosed with dyslexia. She attended university in Mexico City, where she studied International Relations at the Universidad Iberoamericana.

At the age of 23, Hayek landed the title role in Teresa (1989), a successful Mexican telenovela that made her a star in Mexico. In 1994, Hayek starred in the film El Callejón de los Milagros (Miracle Alley), which has won more awards than any other movie in the history of Mexican cinema. For her performance, Hayek was nominated for an Ariel Award.

Hayek moved to Los Angeles, California, in 1991 to study acting under Stella Adler. Due to dyslexia, she had limited fluency in English. Robert Rodriguez and his producer and then wife Elizabeth Avellan soon gave Hayek a starring role opposite Antonio Banderas in 1995’s Desperado. She followed her role in Desperado with a brief role as a vampire queen in From Dusk Till Dawn, in which she performed a table-top snake dance.

Hayek had a starring role opposite Matthew Perry in the 1997 romantic comedy Fools Rush In. In 1999, she co-starred in Will Smith’s big-budget Wild Wild West, and played a supporting role in Kevin Smith’s Dogma. In 2000, Hayek had an uncredited acting part opposite Benicio del Toro in Traffic. In 2003, she reprised her role from Desperado by appearing in Once Upon a Time in Mexico, the final film of the Mariachi Trilogy. 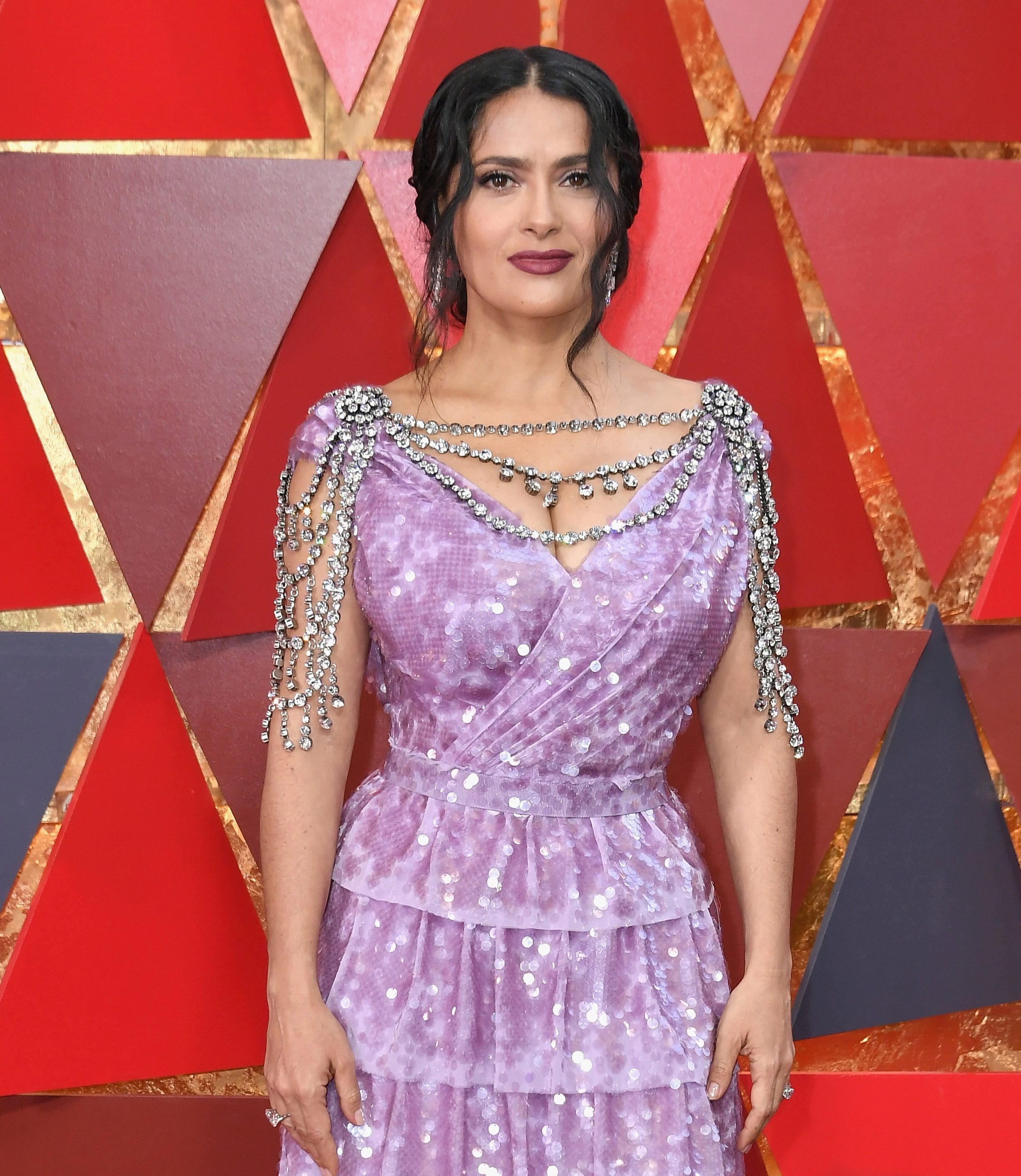 Around 2000, Hayek founded film production company Ventanarosa, through which she produces film and television projects. Her first feature as a producer was 1999’s El Coronel No Tiene Quien Le Escriba, Mexico’s official selection for submission for Best Foreign Film at the Oscars. Frida, co-produced by Hayek, was released in 2002. Starring Hayek as Frida Kahlo, and Alfred Molina as her unfaithful husband, Diego Rivera, the film was directed by Julie Taymor and featured an entourage of stars in supporting and minor roles (Valeria Golino, Ashley Judd, Edward Norton, Geoffrey Rush) and cameos (Antonio Banderas). She earned a Best Actress Academy Award nomination for her performance.

In the Time of the Butterflies is a 2001 feature film based on the Julia Álvarez book of the same name, covering the lives of the Mirabal sisters. In the movie, Salma Hayek plays one of the sisters, Minerva, and Edward James Olmos plays the Dominican dictator Rafael Leónidas Trujillo whom the sisters opposed. In 2003, Hayek produced and directed The Maldonado Miracle, a Showtime movie based on the book of the same name, winning her a Daytime Emmy Award for Outstanding Directing in a Children/Youth/Family Special. In December 2005, she directed a music video for Prince, titled “Te Amo Corazon” (“I love you, sweetheart”) that featured Mía Maestro.

Hayek was an executive producer of Ugly Betty, a television series that aired around the world from 2006 to 2010. Hayek adapted the series for American television with Ben Silverman, who acquired the rights and scripts from the Colombian telenovela Yo Soy Betty La Fea in 2001. Originally intended as a half hour sitcom for NBC in 2004, the project would later be picked up by ABC for the 2006–2007 season with Silvio Horta also producing. Hayek guest-starred on Ugly Betty as Sofia Reyes, a magazine editor. She also had a cameo playing an actress in the telenovela within the show. The show won a Golden Globe Award for Best Comedy Series in 2007. Hayek’s performance as Sofia resulted in a nomination for Outstanding Guest Actress in a Comedy Series at the 59th Primetime Emmy Awards.

In April 2007, Hayek finalized negotiations with MGM to become the CEO of her own Latin themed film production company, Ventanarosa. The following month, she signed a two-year deal with ABC for Ventanarosa to develop projects for the network. Hayek played the wife of Adam Sandler’s character in Grown Ups, which also co-starred Chris Rock and Kevin James. At his insistence, Hayek co-starred with Antonio Banderas in the Shrek spin-off film Puss in Boots as the voice of the character Kitty Softpaws, who serves as Puss’s female counterpart and love interest. She reprised her role in Grown Ups 2, which was released in July 2013.

Hayek has been credited as a song performer in three movies. The first was Desperado for the song Quedate Aquí. In Frida she performed the Mexican folk song La Bruja with the band Los Vega. She also recorded Siente mi amor, which played during the end credits of Once Upon a Time in Mexico.Hayek along with actor Joe Anderson sing together a cover of The Beatles song “Happiness Is A Warm Gun” on “Across the Universe” motion picture soundtrack.

Hayek has been a spokesperson for Avon cosmetics since February 2004. She formerly was a spokesperson for Revlon in 1998. In 2001, she modeled for Chopard and was featured in 2006 Campari adverts, photographed by Mario Testino. On April 3, 2009, she helped introduce La Doña, a watch by Cartier inspired by fellow Mexican actress María Félix.

Hayek has worked with the Procter & Gamble Company and UNICEF to promote the funding (through disposable diaper sales) of vaccines against maternal and neonatal tetanus. She is a global spokesperson for the Pampers/UNICEF “partnership” 1 Pack = 1 Vaccine to help raise awareness of the program. This “partnership” involves Procter & Gamble donating the cost of one tetanus vaccination (approximately 24 cents) for every pack of Pampers sold. (Pampers diapers cost approximately 25 cents each, or about US $1,000 per child per year in the US market).

In 2011, Hayek launched her own line of cosmetics, skincare and haircare products called Nuance by Salma Hayek, to be sold at CVS stores in North America. She was inspired to create a cosmetic line from her grandmother, who used to make her own facial care products. Hayek was also featured in a series of Spanish language commercials for Lincoln cars. In spring 2006, the Blue Star Contemporary Art Center in San Antonio, Texas displayed 16 portrait paintings by muralist George Yepes and filmmaker Robert Rodriguez of Hayek as Aztec goddess Itzpapalotl. 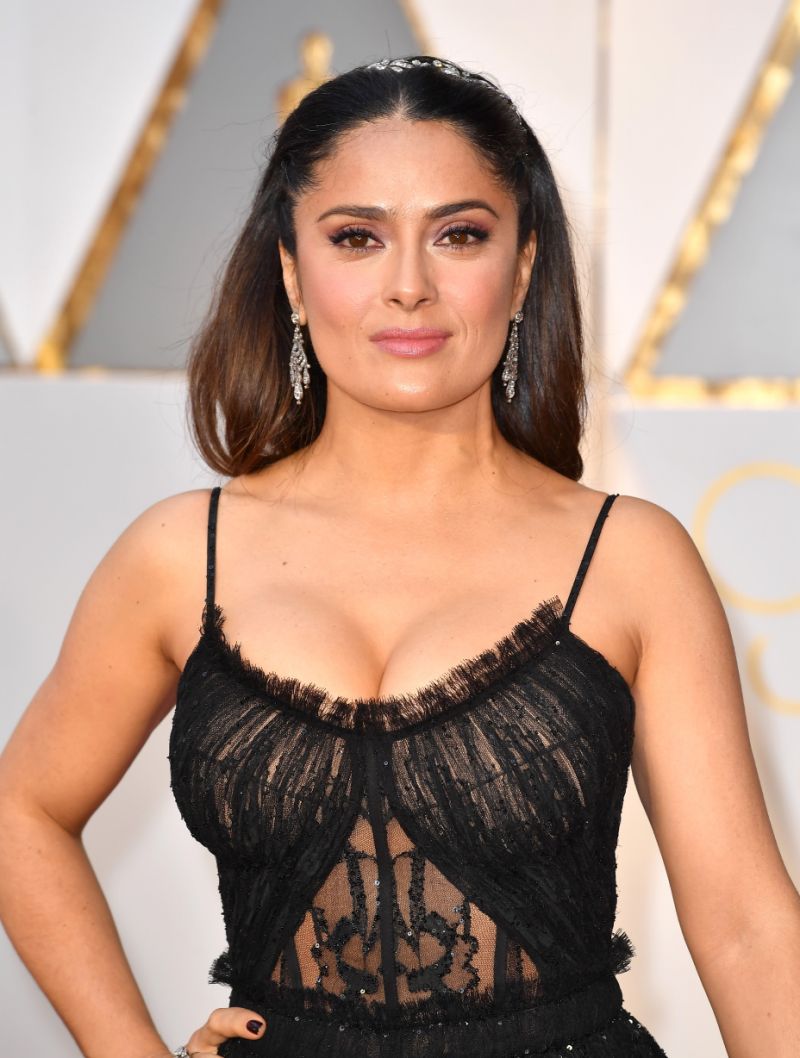 Hayek is a naturalized United States citizen. She studied at Ramtha’s School of Enlightenment, and is a practitioner of yoga. Hayek, who was raised Catholic, said she is not very devout anymore and does not believe in the institution Church, but still believes in Jesus Christ and God.On March 9, 2007, Hayek confirmed her engagement to French billionaire and PPR CEO François-Henri Pinault as well as her pregnancy. On September 21, 2007, she gave birth to daughter Valentina Paloma Pinault at Cedars-Sinai Medical Center in Los Angeles, California. On July 18, 2008, Hayek and Pinault announced the end of their engagement. They later reconciled and were married on Valentine’s Day, 2009 in Paris. On April 25, 2009, they were married a second time in Venice.

In July 2011, Hayek’s husband was named in a paternity case. According to reports, Pinault is the father of supermodel Linda Evangelista’s four-year-old son, Augustin James. He denied all allegations, although the reports were later substantiated.

Hayek’s charitable work includes increasing awareness on violence against women and discrimination against immigrants. On July 19, 2005, Hayek testified before the U.S. Senate Committee on the Judiciary supporting reauthorizing the Violence Against Women Act. In February 2006, she donated $25,000 to a Coatzacoalcos, Mexico, shelter for battered women and another $50,000 to Monterrey based anti-domestic violence groups. Hayek is a board member of V-Day, the charity founded by playwright Eve Ensler.
Hayek also advocates breastfeeding. During a UNICEF fact-finding trip to Sierra Leone, she breastfed a hungry week-old baby whose mother could not produce milk. She said she did it to reduce the stigma associated with breastfeeding and to encourage infant nutrition.

In 2010, Hayek’s humanitarian work earned her a nomination for the VH1 Do Something Awards. In 2013, Hayek launched with Beyoncé Knowles and Frida Giannini a Gucci campaign, “Chime For Change”, that aims to spread female empowerment. 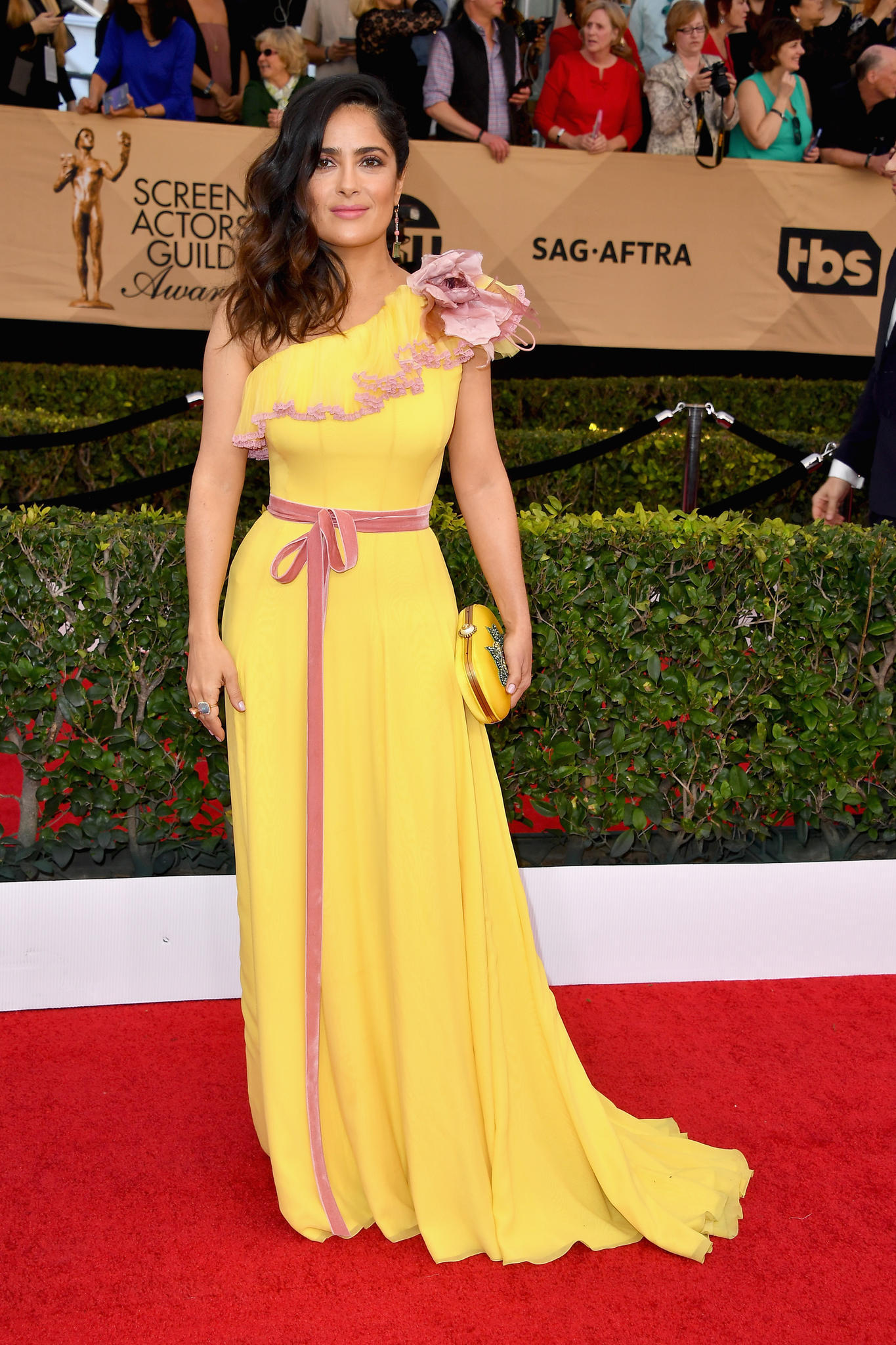 In July 2007, The Hollywood Reporter ranked Hayek fourth in their inaugural Latino Power 50, a list of the most powerful members of the Hollywood Latino community. That same month, a poll found Hayek to be the “sexiest celebrity” out of a field of 3,000 celebrities (male and female); according to the poll, “65 percent of the U.S. population would use the term ‘sexy’ to describe her”. In 2008, she was awarded the Women in Film Lucy Award in recognition of her excellence and innovation in her creative works that have enhanced the perception of women through the medium of television. In December of that year, Entertainment Weekly ranked Hayek number 17 in their list of the “25 Smartest People in TV.”

Was a member of the 2005 Cannes Film Festival jury. Co-hosted the annual Nobel Peace Prize concert with Julianne Moore in Oslo, Norway on December 11, 2005.