Cameron Diaz: “Theres no such thing as anti-aging” 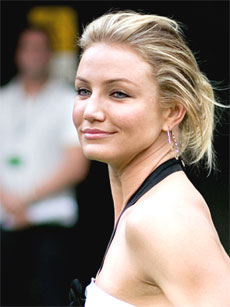 In an interview to Esquire magazine Cameron Diaz said Theres no such thing as anti-aging – its all a crock of sh*t, you cant go back in time. So for me, its about living in this moment, the best that I can. Contentment is about coming to terms with life as it is, rather than getting all pissed off that things didnt fit into your little prescribed box. And its much bigger.

Cameron Michelle Diaz was born August 30, 1972. She is an American actress and former model. She rose to prominence during the 1990s with roles in the movies The Mask, My Best Friend’s Wedding and There’s Something About Mary. Other high-profile credits include the two Charlie’s Angels films, voicing the character Princess Fiona in the Shrek series, The Holiday, The Green Hornet and Bad Teacher. Diaz received Golden Globe award nominations for her performances in the movies There’s Something About Mary, Being John Malkovich, Vanilla Sky, and Gangs of New York.

She further adds For the first time in my life Im content. I turn 40 at the end of the month – 30 August. Im so excited. Getting older is the best part of life. Like, I know more than Ive ever known. I have gratitude. I know myself better. I feel more capable than ever. And as far as the physicality of it – I feel better at 40 than I did at 25.

Im smart! No, its hard to say. It just wasnt the thing I was drawn to. I certainly didnt want it in my twenties. Or my thirties. And Im going to be 40 in three weeks. So well see! Id always wanted to get hitched in Vegas at least three times. Its funny because as my girlfriends get older, I see how their relationships have evolved, and you know, the people youre drawn to changes. Im not attracted to the same people that I was drawn to in my twenties.
I dont need to have the children in my life be a part of my literal flesh. And anyway, theres still a possibility of that, I aint that old. Believe it or not, Im feeling very…capable.