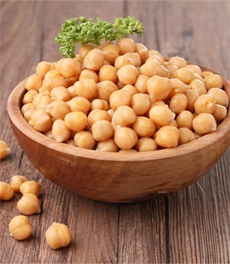 Chickpeas hold the cure for leukoderma, a chronic skin disease that causes loss of pigment, resulting in white spots or patches on the skin, claim scientists of the Banaras Hindu University (BHU). In a research project undertaken jointly by the varsitys medicinal chemistry and skin departments, scientists have found that application of a poly-herbal ointment with chickpeas as its base can efficiently treat leucoderma or vitiligo, controlling the spread of the skin disease that is widely feared for the unsightly white patches it produces.

The results were encouraging, said an elated Yamini Tripathi, a professor with BHUs medicinal chemistry department and a member of the research team, told IANS.
The chickpea therapy has been tried on 50 patients, who got considerable relief from the skin disorder, added Tripathi, who has now approached the Indian Council of Medical Research (ICMR) for a major research project on vitiligo treatment.

According to the researchers, patients who applied the chickpea-based cream on affected parts of the skin for 20-90 days found their normal skin pigmentation had returned.
In the fastest cure, a young scooter mechanic here saw the white patches disappear within 28 days.

Such a speedy result surprised even us. When we asked for his feedback, he said during his treatment he included a good amount of chickpeas in his regular diet, said Tripathi.

Vitiligo is an autoimmune disease in which the body starts producing antibodies that destroy cells known as melanocytes that give the skin its normal colour. Gradually, the affected areas of the skin turn white, which is one of the most common symptoms of vitiligo.

BHU researchers say that the anti-vitiligo ointment derives its potency from amino acids found in chickpeas.

Amino acids found in chickpeas promote synthesis of melanin (skin pigment) formation cells, regenerates the pigment cells and help in treating the chronic skin disorder, said Tripathi.
In vitiligo patients, white patches are more obvious in sun-exposed areas, including arms, legs, face and lips. Other common areas for white patches to appear are the armpits and groin, around mouth and eyes.

S.N. Ojha, a doctor who is also the member of the research team, said that at present there is no definite method to prevent vitiligo. It is heartening that our chickpea therapy can offer a promising and cost-effective treatment, he added.