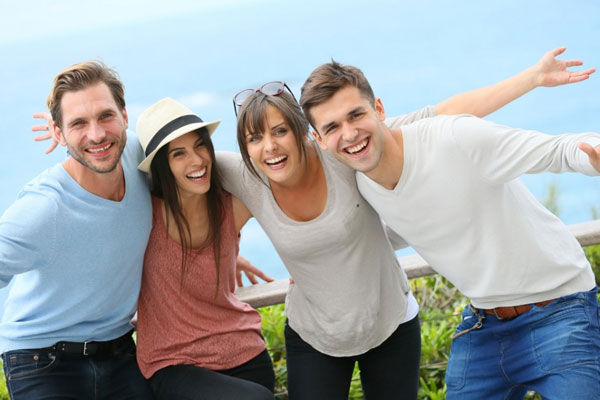 A new study led by psychology researchers with The University of Texas at Arlington sheds new light on why many heterosexual women develop close friendships with gay men.

It’s a social pattern that has been a central theme of television shows such as “Modern Family,” “The Office,” “Sex & the City,” “Will & Grace,” and other pop culture movies and television programs for years. But the researchers say there has never been an empirical study of the circumstances that drive such relationships until now.

The research affirmed that women place more trust in dating advice from a gay male friend than from heterosexual men because gay men have fewer ulterior mating motives. Also, women are more likely to trust and befriend gay men when they are in a highly competitive dating environment, such as a university with more female students than male students, the studies showed.

“This line of research provides novel experimental evidence that there is more to the gay male-straight female friendship than just what we see on TV — certain social psychological processes are, indeed, driving these relationships in real life,” said Eric Russell, the paper’s lead author, a doctoral student, and graduate teaching assistant in the UTA Department of Psychology.

Dr. William Ickes, a UTA Distinguished Professor of Psychology in the UTA College of Science, is co-author of the study and Russell’s mentor. Ickes has published extensively in the areas of sex and gender roles and relationships and said psychologists study such social patterns to enhance understanding of the human condition.

“These studies are both timely and important because of the recent seismic shift in public opinion in support of equal rights and acceptance of gay individuals,” Ickes said. “Eric’s research emphasizes the benefits to straight women of having gay male friends, and it opens the door to a fuller exploration of the positive aspects of gay-straight relationships. He is creative in finding ways to translate his own insights as a gay man into socially relevant and informative research.”

The research, which comprises four separate studies, involved nearly 700 heterosexual female students at a major public university in the southwestern United States. All of the participants were enrolled in at least one undergraduate psychology class and received partial course credit for their participation. The group was almost evenly split between women who identified themselves as Caucasian, African-American, Hispanic, Asian or of another ethnic group.

The first study involved 167 women evaluating mock social media profiles of either a straight woman, straight man or gay man. It demonstrated that the women placed greater trust in a gay man’s advice about a potential mate — but not in their advice about careers — than in the same advice given by heterosexual individuals.

The second study of 272 women showed that they perceived a gay man to be more sincere than either a straight male or a straight female in scenarios in which the women were told potentially deceptive information that could lead to competition for a mate or a sexual encounter.

For the third study, researchers designed two mock news articles. The first described an increasing number of females and a dwindling number of males on college campuses around the nation. The article emphasized the increasing competition women were experiencing in trying to get a date on campus. The second mock article discussed sex-specific sleep patterns, which served as a control.

The 128 female participants were assigned to read one of the two articles and then completed tasks via computer related to social media profiles belonging to a gay man and a straight woman. The results revealed that the article describing the increase in mating competition enhanced the straight women’s trust in a gay man relative to another woman.

Ta acknowledged that when mating competition was high, women’s trust in mating information from a gay man increased.

The fourth study included 129 women and showed that when the women perceived heightened levels of mating competition, they were more open to forming friendships with gay men.

Russell said, “Together, these converging findings supported our central hypothesis, which not only provides a distal explanation for the trust that straight women place in gay men, but it also provides novel insights into previously unidentified contexts that facilitate the formation and strengthening of this unique bond.”

The study done by University of Texas at Arlington.