Fixing Feet with a New Surgery 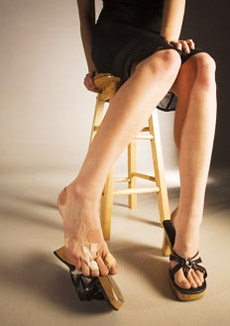 ATLANTA, GA (Ivanhoe Newswire) — Hes overcome a developmental disorder to compete on the ice, but a physical abnormality almost forced him to give up his passion.

For 11 year old Harrison Sokol, skating is everything.

“Ive been skating since i was four, and i pretty much like everything about it,” Harrison said.

Harrison has an autism spectrum disorder, but when he puts on a pair of skates, theres no stopping him.

“Theres no telling him what he can or cant do,” Laura Sokol, Harrisons mom, told Ivanhoe.

Autism isnt Harrisons only challenge. He was born with a painful abnormality of calf muscle and bone that made him more and more unstable

“His feet started rolling in and it just got worse and worse,” Laura said.

To get Harrison back on track, Doctor Mark Gorman performed his own spin on a procedure called gastrocnemius recession, to lengthen Harrisons Achilles tendons.

“We stretch the calf muscle, the gastrocnemius muscle where the tendon and muscle come together right at that area without damaging the tendon,”Mark R. Gorman, DPM, diplomate abfas, explained.

Then, a custom-fit conical titanium implant was placed between the heel bone and ankle bone in each foot, to restore normal stability and mobility.

A year after surgery, Harrison is back on the ice solo skating, ice dancing and winning gold. A tough competitor heading toward his biggest challenge yet, the 2013 international special Olympics.

Now that Harrisons stability and motion problem has been surgically repaired, doctors say its likely to be a permanent solution. Though future complications are unlikely, the conical implants in his feet can easily be removed or replaced if necessary.