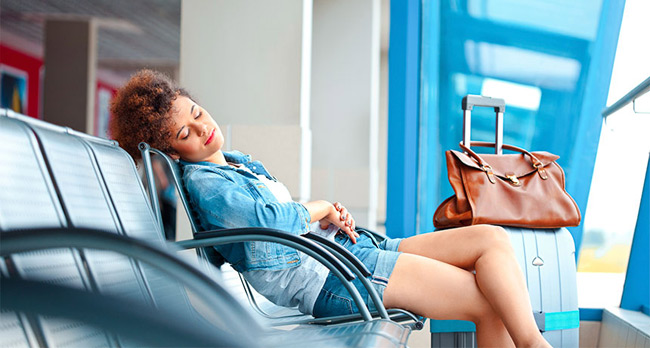 Scientists in Japan have designed new molecules that modify the circadian rhythm, opening the way to the possibility of managing jet lag and improving treatments for sleep disorders.

The negative impacts of jet lag and shift work could be significantly reduced if it were possible to reset our 24-hour natural circadian or sleep/wake cycle. Researchers at Nagoya University’s Institute of Transformative Bio-Molecules (ITbM) have taken the first step in that direction by synthesising molecules that can shorten the circadian period. These molecules act directly on one of our “clock proteins,” called CRY.

Most living organisms, including humans, have a biological clock that resets every 24 hours, regulating functions such as sleep/wake cycles and metabolism. When this cycle is disrupted, like in jet lag, sleep disorders ensue. Long-term sleep loss may affect the cardiovascular, endocrine, immune and nervous systems with severe consequences including hypertension, obesity and mental health disorders, among others.

Our biological clock is basically run by four “master regulator” proteins that work in tandem. CLOCK and BMAL1, when combined, promote the production of the proteins PER and CRY. These proteins, in turn, block CLOCK and BMAL1, thus closing the cycle. This cycle of activation, production and stop/block goes around once a day and is also influenced by a compound called FBXL3, which flags CRY for degradation by cellular enzymes.

A molecule discovered in 2012, called KL001, lengthens the circadian cycle by competing with FBLX3 for the same spot on the CRY protein, preventing its degradation. By carefully analysing its structure, the ITbM researchers prepared compounds that were similar to KL001, thus synthesising the first circadian shortening molecules that target the CRY protein.

This tailor-made approach to designing molecules holds great potential for the future. Takashi Yoshimura, one of the authors of the article, says, “We hope we can make further use of synthetic chemistry to make bioactive molecules that can control the circadian rhythm of animals and gain further insight into the circadian clock mechanism, which will surely contribute to medical applications, food production and advances in clock research.”