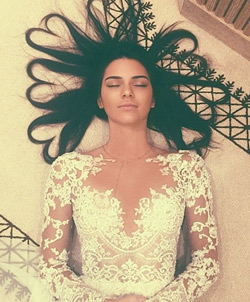 If you thought you were Instagram popular, then you may want to check out Kendall Jenner’s ‘heart hair’ photograph, which has picked up 2.6 million likes in only five weeks. Jenner’s photo now sets the record for the most-liked Instagram photo ever posted. The previous holder of the title was Jenner’s half-sister, Kim Kardashian.

Previously, Kardashian held the record for most-liked Instagram post: a photograph of herself and her husband, Kanye West, sealing their recent marriage with a romantic kiss. Kardashian’s photo came in at 2.4 million likes, meaning that as of this moment, Jenner has already bested her sister by 200,000 likes.

The nineteen-year-old model celebrated on Twitter by retweeting news of the record and declaring her victory over Kim Kardashian.

Kendall Jenner is winner of 2013 Teen Choice Awards in the category ‘Female Reality/Variety Star’ and has been nominated in 2014 Young Hollywood Awards, Teen Choice Awards Female Hottie & Candie’s Style Icon and Capricho Awards. Kendall Nicole Jenner  is an American fashion model and television personality. Jenner first came to public attention for appearing in the E! reality television show Keeping Up with the Kardashians.

Jenner is a part of an emerging fashion movement which has been dubbed “Social Media Modelling” by Harper’s Bazaar and ‘the Instagirl era’ by Vogue. After working in commercial print ad campaigns and photoshoots, Jenner had breakout seasons in 2014, walking the runways for high fashion designers during the New York, Milan, and Paris Fashion Weeks. Jenner is known for posting celebrity selfies and career updates to her followers on social media.

Jenner was raised with her sister and maternal half-siblings in Calabasas, a suburb west of Los Angeles. She attended Sierra Canyon School before switching to homeschooling with sister Kylie Jenner in order to pursue modelling. Jenner graduated in 2014.

Jenner modelled in swimwear campaigns with White Sands Australia, Leah Madden,and Agua Bendita, a campaign she shared with Victoria’s Secret model Candice Swanepoel.
On November 21, 2013, Jenner signed with The Society Management. In the spring of 2014 Jenner walked Fashion Weeks in New York for Marc Jacobs, London for Giles Deacon, and Paris for Givenchy and Chanel. In May 2014, Jenner made her socialite debuts at the New York City Met Ball and Cannes Film Festival. In June 2014, Jenner featured in Interview and was cast in a Givenchy campaign. In July 2014, Karl Lagerfeld picked Jenner to walk for Chanel in Paris. Jenner was on the cover of LOVE’s August issue, where she was hailed as “the ‘It Girl’ of the season” by LOVE editor Katie Grand. Jenner was on two September issue Teen Vogue covers.

On November 15, 2014, Jenner announced through her social media accounts that she had been selected as the new global face of Estée Lauder. Within 3 days of the announcement, the company’s Instagram account gained 50,000 new followers, increasing their fanbase over 19% to 308,000 Instagrammers. On November 26, 2014, Jenner was added to Models.com’s Top 50 list and placed #1 on their combined Social list: Jenner ranked as the #1 most followed model on Facebook and Instagram, and #2 most followed model on Twitter behind Tyra Banks, with a combined reach of 33.19 million followers by the end of December 2014. Jenner was named the second most Googled model in the world in December 2014.

Kendall and Kylie Jenner have co-hosted public events together. The Jenner sisters hosted Glee: The 3D Concert Movie at the Regency Village Theater in Westwood, California on August 6, 2011. The Jenners hosted the premiere of The Vow in Hollywood, California on February 6, 2012. The Jenner sisters interviewed the cast of The Hunger Games premiere in the Bing Box at The Nokia Theatre L.A. Live on March 12, 2012. Kendall Jenner presented at the 2014 Billboard Music Awards, where she mistook band 5 Seconds Of Summer as One Direction live on national television. The Jenner sisters co-hosted the Much Music Video Awards in Toronto, Canada on June 15, 2014. Jenner drew considerable attention for the risqué Fausto Puglisi-designed dress she wore on the red carpet.

Jenner worked with the online website Dazed and made a parody video using the idea of the “Burn Book” from Mean Girls to answer back to her online bullies.
Jenner first became known by appearing in her extended family’s E! reality show Keeping Up with the Kardashians. In 2010 Jenner was cast in boy band One Call’s Blacklight video, along with Ashley Benson and Kevin McHale. In 2012, Jenner appeared as AJ on the I Ka Wa Mamua episode of Hawaii Five-0. Jenner did voiceover for the character Strawberry in The High Fructose Adventures of Annoying Orange episode Shakesparagus Speare (Season 2, episode 23), which aired on January 20, 2014. In August 2014, Jenner appeared in singer Partynextdoor’s video Recognize with sister Kylie Jenner and rapper Drake.

Seventeen magazine featured Kendall and Kylie Jenner as Style Stars of 2011 and featured them as Seventeen’s Style Ambassadors for the magazine. In 2014, the Jenner sisters co-authored novel Rebels: City of Indra with ghostwriter Maya Sloan. The novel was criticized upon release as a ghostwritten work, which prompted Sloan to clarify that the book was compiled and edited from the Jenner sisters’ original ideas.

Jenner has two nail lacquers from the Nicole by OPI Kardashian Kolors nail polish, All Kendall-ed up and Kendall on the Katwalk. The Jenner sisters earned $100,000 each for their OPI endorsements in 2013. On November 15, 2012, the Jenner sisters announced that they would launch The Kendall & Kylie collection with PacSun which launched on February 2013. Since its conception, the sisters have released several collections for this line. In July 2013 the Jenner sisters launched a jewelry line with Pascal Mouawad’s Glamhouse to create the Metal Haven by Kendall & Kylie jewellery collection.

In February 2014, Kendall and Kylie launched a shoe and handbag line for Steve Madden’s Madden Girl line, for Nordstrom. On October 13, 2014, Time magazine named the Jenner sisters as two of the most influential teens of 2014 for their considerable influence among teens on social media. Media rumors of a Kendall & Kylie clothing line collaboration with Topshop were confirmed on February 3, 2015.

In 2012, Jenner formed a long-term relationship with fellow Sierra Canyon School alumnus and Nevada Wolf Pack wide receiver Julian Brooks, keeping the relationship a secret for a year before the couple shared messages on Twitter and photos on social media. The couple broke up in August 2013 over allegations of Brooks’ infidelity. Jenner later dated One Direction member Harry Styles from October 2013 to November 2014. In May 2014, Jenner purchased a $1.4 million two-bedroom, 2.5-bath condominium in Los Angeles as her primary residence.

Jenner set up an eBay account where she auctions old clothing to raise money for the Children’s Hospital Los Angeles. The Kardashian and Jenner sisters used eBay in this way to raise $277,469.60 for their charities in 2013. Jenner joined her family in a charity yard sale on November 10, 2013. Proceeds from the sale were donation-matched and sent to Share Our Strength: No Kid Hungry and the Greater Los Angeles Fisher House Foundation. Jenner and Kim Kardashian attended a Christmas Eve visit with the kids at Children’s
Hospital Los Angeles on Tuesday December 24, 2013.

Jenner joined Khloe Kardashian, Lil Twist, and The Game at PINZ bowling alley in Studio City, California for a charity bowling game on January 19, 2014. The event was held to raise money for The Robin Hood Foundation, a nonprofit for which The Game pledged to raise $1 million in donations. The Jenner sisters participated in singer Chris Brown’s two Kick’n It For Charity Celebrity Kickball games in Glendale, California on July 19, 2014 and on August 16, 2014. At the first game, Jenner played on Chris Brown‘s Team Breezy; sister Kylie competed on actor/singer Quincy Brown’s Team. On February 14, 2015, Jenner appeared at Marc Jacobs’ Bookmarc store in New York City for the launch of LOVE Magazine issue 13. Jenner posed in a limited-edition T-shirt sale to raise proceeds for Designers Against AIDS.

Kendall Jenner is today ruling the world of fashion and glamour. She is a supermodel and the most in demand. She has been on the cover of all major magazines and has walked all leading fashion ramps from US to Europe.