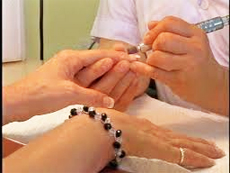 SAN DIEGO (Ivanhoe Newswire) –An estimated 4.4 million Americans are living with chronic hepatitis and most dont know it. Now a new study shows customers in nail salons could be putting themselves at risk for the deadly disease. Well show you what to watch out for.

From polishing to cleaning, Nancye Swanson does her own nails these days. Six months ago, she almost died from something she picked up at a salon.

It felt like the flu, Nancye Swanson, a hepatitis B patient told Ivanhoe.

Her skin looked yellow, doctors told her that was a clear sign of hepatitis B a serious liver infection. It happened while she was getting a pedicure.

A lot of these places use sharp instruments and they could be re-using those, Robert Gish, M.D., a clinical professor at UC San Diego told Ivanhoe.

Dr. Robert Gish is writing a health policy for the Vietnamese government on the spread of hepatitis B. Thats because every person born in the Asian Pacific region are at a high risk of already having it. That includes the thousands of people working in salons across the U.S and they may not even know they are a carrier.

95 percent of people with hepatitis B have no symptoms. Thats the problem, Dr. Gish said.

While there is no curea pill once a day will control it. Thats what Nancye did.

I cannot believe I was that close to death, Nancy explained.

Here are some ways you can protect yourself at the salon. First, make sure your salons license is clearly posted. Scissors and clippers should be disinfected after each use and only disposable files should be used. The same goes for the pedicure bath and all suction screens in the tubs. Thats where deadly bacteria gets trapped. Also, look for labels on products. If you dont see one, they could be diluted. Also, always-take your own polish.

Its not just nail salons to watch out for. Dr. Gish says anyplace where you can get tattoos, ear piercing, body piercing, and even dental offices can put you at risk.