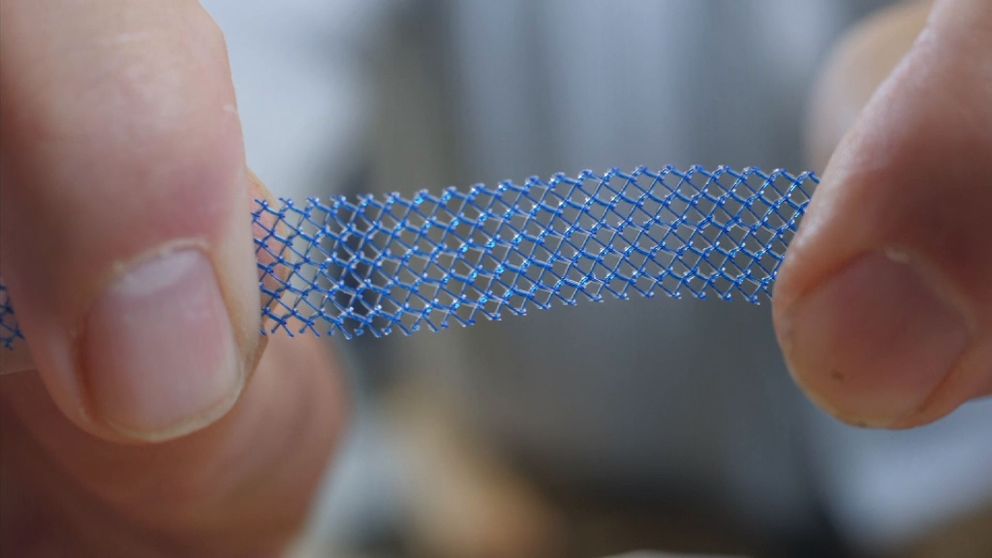 Scientists from the University of Sheffield have developed a material that could be used as an alternative to the current vaginal mesh material, polypropylene, used to treat pelvic organ prolapse and stress urinary incontinence.

The use of these current meshes, in particular surgical procedures, has led to severe complications for millions of women across the world and is now banned in Australia.

The research conducted by the University of Sheffield, published today in the Journal of Neurourology and Urodynamics, provides evidence which supports the use of a softer and more elastic material better suited for use in the pelvic floor and one that releases oestrogen into the surrounding pelvic tissue to form new blood vessels and ultimately speed up the healing process.

Scientists from the Department of Material Science and Engineering at the University of Sheffield have recently concluded that a different material, polyurethane, would be a much better material to use as a vaginal mesh due to its flexibility and its likeness to human tissue.

Polyurethane possesses much more elasticity than polypropylene and is therefore better equipped to sustain the pelvic organs — the bladder, bowel and vagina — exerting pressure on the pelvic floor every day.

The research group at the University of Sheffield have also gone one step further in their research by introducing the female hormone, oestrogen into the polyurethane mesh. The research in the paper demonstrates that oestrogen stimulates cells to produce new tissue and form new blood vessels — regenerating the tissue and ultimately speeding up the healing process. In initial research, the mesh retained its strength and elasticity and was not compromised by incorporating the oestrogen into it.

Professor Sheila MacNeil, Professor of Tissue Engineering in the Department of Materials Science and Engineering at the University of Sheffield said: “For many years now, surgeons have been treating the problems of urinary stress incontinence and pelvic organ prolapse using the only synthetic material they had to hand — polypropylene.

“In certain procedures, for example, when the polypropylene mesh is used as a thin strip to support the urethra and reduce the symptoms of stress incontinence, the results show it is beneficial to the patient and carries relatively little risk.

“However, when much bigger areas of the same material are inserted through the vagina to relieve pelvic organ prolapse, the complication rate is frankly unacceptable.

She added: “Over the last seven years, we have investigated a range of materials and for the past few years, we have focused our efforts on polyurethane, using the method of electrospinning to create a fine mesh which we have fabricated in layers to mimic the structure of human tissue. We have shown through our research that it does not provoke inflammation and retains its strength and elasticity. The addition of oestrogen is a major breakthrough as we have proved its beneficial effects in regenerating pelvic tissue.”

Pelvic organ prolapse and stress urinary incontinence affects 50 per cent of postmenopausal women worldwide. Many women view both conditions as embarrassing and in addition to the physical symptoms and inability to have a normal sex life, these disorders can lead to depression, anxiety and a reduction in the quality of social life.

In the UK, around 20 per cent of postmenopausal women suffer from pelvic organ prolapse, which occurs when a pelvic organ, such as the bladder, drops from its normal place in the lower abdomen and pushes against the walls of the vagina. This commonly affects women after childbirth but will often only become apparent years later once they go through the menopause and the lack of female hormones affect the pelvic tissue.

Many of these women choose to undergo major surgery, to insert the more rigid polypropylene mesh which acts as a scaffold to support the prolapsed pelvic organs.

The aim of the mesh is to give permanent support to the weakened organs. A number of meshes currently used have led to severe complications such as chronic inflammation, leading to pain and scar tissue formation around the implant.

Around 19 per cent of women who undergo this procedure have gone on to have a second procedure as a result of complications following the initial surgery.

The first lawsuits concerning polypropylene mesh went to trial in America in 2012 and 2013. Since then, several companies making these meshes have lost multimillion dollar lawsuits totalling billions of dollars. Many companies stopped marketing mesh for pelvic organ prolapse as a result. However, they continue to market the same mesh for the treatment of stress urinary incontinence as they use a strip of it as a tape under the urethra and it remains very beneficial for the majority of patients with a very low complication rate in experienced hands.

The material will need to go through rigorous clinical trials and only once it has been approved, scientists at the University of Sheffield hope this breakthrough research will have a hugely positive impact on millions of women across the globe.