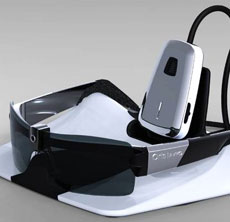 (Ivanhoe Newswire)  Looking into the future of medicine! Researchers may have found new hope for sufferers of macular regeneration facing blindness.

While injectable drugs called angiogenesis inhibitors are considered a modern miracle and have become the standard of care for patients with the fast-progressive form of macular degeneration, they are not foolproof. For the first time researchers report that an oral nutriceutical, used on a last resort basis, rapidly restores vision to otherwise hopeless patients who face permanent loss.

Stuart Richer OD, PhD, Director, Ocular Preventative Medicine-Eye Clinic, James A. Lovell Federal Health Care Center, North Chicago, Illinois, say all other therapies were exhausted before employing the oral nutriceutical under compassionate-use protocols on a case-by-case basis. Usually most patients respond to medicine injected directly into the eyes, but “about one in three patients recover driving vision and one in six patients go on to experience permanent vision loss and others may refuse needle injections directly into the eyes, making them candidates for this rescue medicine,” Dr. Richer was quoted saying.

16 of the first 17 cases responded positively to nutriceutical medicine, and there were no side effects reported. Because these patients faced impending loss of vision, for ethical reasons no patients received inactive placebo pills. It is unknown whether this nutriceutical produces such positive results in the more common dry form of macular degeneration, Doctor Richer added, but the benefit to vision is typically observed in both eyes and is self-evident.

In the first cases researchers have monitored, blind spots (called scotomas) disappear, time to recover from bright light (glare recovery) is reduced, and contrast vision (shades of grey) as well as visual acuity (ability to see letters on a chart) generally improve within 3-6 weeks with the nutriceutical. “With our instruments we documented a more youthful appearance of retinal tissues as well as improved underlying circulation. There were also other improvements in health observed or measured outside of the eyes that were unanticipated,” Dr. Richer was quoted saying.

Only in recent years has there been a reliable way to treat wet macular degeneration, a disorder where abnormal blood vessels invade the visual center (macula) of the eyes. Any of three FDA-approved drugs, Avastin, Lucentis and Eylea, are needle-injected into the white of the eye to diminish the formation of these abnormal blood vessels. These are considered miracle drugs. Re-treatment is usually necessary every six to eight weeks. However, since these drugs are not foolproof, oral antioxidant therapy was employed with measurable success.

Dr. Richer selected a particular nutriceutical mixture of vitamins and small herbal molecules (Longevinex®) because of its extensive testing and proven ability to favorably alter genes in a superior manner to other available nutriceuticals. He cautions that other similar store-bought products are not likely to produce the same rapid results seen among his patients. He advises patients not to risk their vision with unproven products. Nor should patients consider this oral medicine supplants injected medicine.

While the nutriceutical used in this report is non-prescription and directly available to patients and could be used alongside injected drugs, researchers recommend physician consultation prior to its use. It still remains unproven until it is evaluated in broader studies, “this oral nutriceutical taps into the newly appreciated science of epigenetics, where gene protein-making switches are favorably turned on and off, and suggests that age-related eye problems may not be inevitably progressive and biological age is not necessarily cast in stone,” Dr. Richer was quoted saying. There is new-found hope for recovery of lost vision, regardless of the patients image.