With 46 million turkeys raised on inhumane factory farms and slaughtered for Thanksgiving across America, Farm Sanctuary, the organization dedicated to combating the abuses of animal agriculture and encouraging a new awareness and understanding about farm animals, is teaming up with Kaley Cuoco, Joaquin Phoenix, Kevin Smith and his daughter Harley Quinn Smith to encourage people to #BreakTheChain of old traditions by taking the turkey off their plate and sponsoring one instead through Farm Sanctuary’s 33rd annual Adopt a Turkey Project. 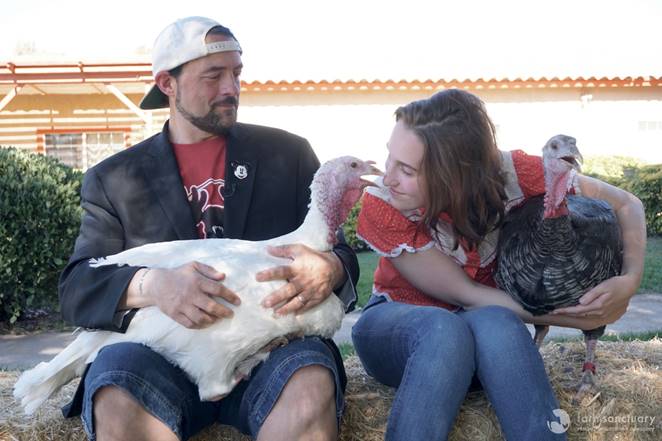 In separate video messages, Cuoco and the Smiths explore the concept of tradition and how customs bring us closer, but can also bind us—especially in the case of eating turkey at Thanksgiving, as we see the impact that slaughtering millions of turkeys for a single holiday has on our health, planet, and future generations. As an easy first step, they suggest sponsoring a Farm Sanctuary-rescued turkey this Thanksgiving.

Says Phoenix, “Thanksgiving is for many a chance to honor tradition, a chain with many links connecting us to who we are and where we came from. But some chains need to be broken, especially when they bind us to antiquated and unsustainable traditions like eating turkey. Each year 46 million turkeys are cruelly raised and slaughtered for Thanksgiving. The majority of these birds are raised on factory farms, linked to air and water pollution, soil erosion, ocean degradation, and wildlife devastation – hurting us and our planet. That’s bad news for future generations; not a tradition anyone would want to pass down. This Thanksgiving, break the chain of old traditions and try something new. Take the turkey off your plate. Adopt one instead.”

Since 1986, Farm Sanctuary’s annual Adopt a Turkey Project has led to the rescue of more than 1,000 turkeys from a brutal death and given thousands of people an opportunity to honor the spirit of the holiday by sponsoring rescued turkey residents and supporting lifesaving rescue, education, and advocacy work on behalf of billions of farm animals just like them. For a one-time donation of $35, you can symbolically adopt Farm Sanctuary-rescued turkeys, Bowie, Gerda, Perdita, Ruthie, and Spunky; or, sponsor the flock for $150. To learn more, visit adoptaturkey.org.

Founded in 1986, Farm Sanctuary works to change how our society views and treats farm animals through rescue, education, and advocacy. The organization provides lifelong care for animals rescued from abuse at sanctuary locations in New York and California; promotes compassionate vegan living; and advocates legal and policy reforms. To learn more about Farm Sanctuary, visit farmsanctuary.org.