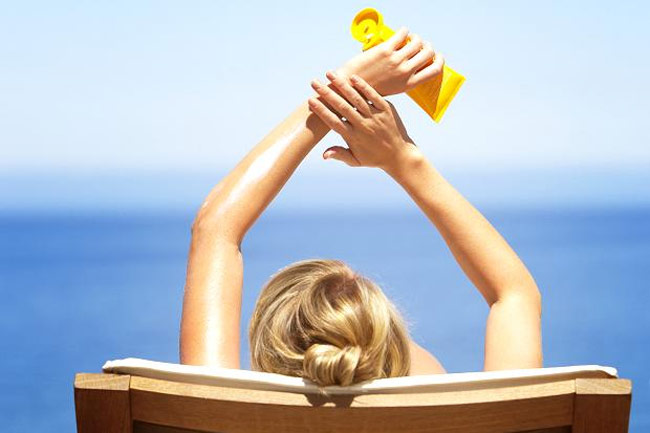 A new USC-led study identified a “sunscreen” gene that may help stave off skin cancer.

The researchers found that the “UV radiation Resistance Associated Gene” is a tumor suppressor for skin cancer, which is the most common form of cancer in the United States. Melanoma is the deadliest skin cancer. In fact, melanoma rates have doubled over the last three decades, according to the Centers for Disease Control and Prevention.

“If we understand how this UV-resistant gene functions and the processes by which cells repair themselves after ultraviolet damage, then we could find targets for drugs to revert a misguided mechanism back to normal conditions,” said Chengyu Liang, the study’s senior author and an associate professor of molecular microbiology and immunology at the Keck School of Medicine of USC.

The study was published in Molecular Cell — in time for Melanoma/Skin Cancer Detection and Prevention Month. More than 90 percent of melanoma skin cancers develop because of cell damage from exposure to UV radiation. Melanoma kills about 10,130 people annually, according to the American Cancer Society.

“That means when people sunbathe or go tanning, those who have the normal UV-resistant gene can repair most UV-induced DNA burns in a timely manner, whereas those with the defective UV-resistant gene will have more damage left unrepaired,” Liang said. “After daily accumulation, if they sunbathe or go tanning often, these people will have increased risk for developing skin cancers such as melanoma.”

The researchers were able to show a correlation with increased cancer risk. Their study did not definitively say diminished levels or mutant copies of the UV-resistant gene were causes for skin cancer development.

Why the UV-resistant gene matters?

Scientists first discovered the UV-resistant gene nearly two decades ago in relation to a disease called Xeroderma Pigmentosum, which makes people extremely sensitive to sunlight and puts them at high risk for developing skin cancer. Scientists did not examine the function of the UV-resistant gene in people who are healthy or who have skin cancer.

The USC-led team has now identified what the UV-resistant gene does and how it operates in a general population, said Yongfei Yang, lead author and a research associate at Keck Medicine of USC.

The researchers did not have data from people without skin cancer, so they were unable to compare their observations of melanoma patients with those of skin cancer-free people.

UV exposure, frequent trips to the tanning salon and genetics all play a role in developing skin cancer. Studies have shown, for example, that redheads are more prone to skin cancer because of their genetic background. Liang, Yang and their colleagues have identified a new player in the skin cancer field.

“To our knowledge, the UV-resistant gene does not have any enzymic activity; It’s a supporter or coordinator,” Liang said. “Although it may not be the direct doer, without it, the whole structure collapses.”

Future studies will use mouse models to better understand how the UV-resistant gene functions.

“The UV-resistant gene may serve as a good target for drug development,” Yang said. “Perhaps one day a drug could stimulate the repairing functionality of the UV-resistant gene to ensure swift and effective repair of UV-damaged skin cells. That would be a good treatment for people who are at high risk of developing skin cancer.”