Even in war, hospitals have a kind of invisible bubble around them, making them neutral territory and off limits for aggression for the sake of medical teams and their patients. 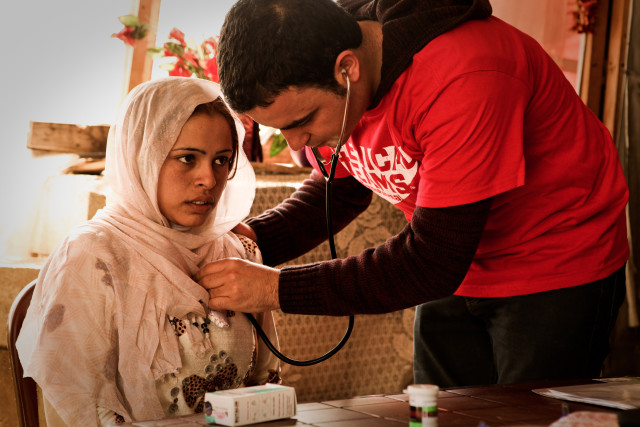 But in Syria, that bubble has burst dozens of times, according to a new report from the group Physicians for Human Rights. The hospitals in just the eastern half of Aleppo city have suffered 45 attacks in three years, and two-thirds have closed.

And that may put medical facilities and workers in other conflict zones in danger too, according to a new opinion piece in the New England Journal of Medicine by the report’s authors, including a University of Michigan Medical School professor.

They call on the international community to react to these violations of international humanitarian law, and of the principle of medical neutrality.

“Medical professionals around the world think of Syria as not affecting them, but the situation there is setting a terrifying precedent throughout the world,” says Michele Heisler, M.D., MPA, who volunteers to do research for PHR as part of her U-M faculty role. “For much of the 20th century, warring parties for the most part had respected medical neutrality and allowed doctors and nurses to provide health care in conflic — but once that starts to be eroded it could make even the basic provision of health care impossible.”

Heisler and her colleagues documented the plight of Aleppo hospitals by interviewing 25 Syrian physicians and other health care workers. Many had crossed the border into Turkey to attend a medical conference held this past July by the Syrian American Medical Society. They returned to their posts afterward, despite knowing that over 95 percent of Aleppo’s doctors have fled the country, or been detained or killed.

The report examines the impact of attacks on the medical infrastructure and personnel in the portion of Aleppo held by opposition forces and the healthcare status and needs of the civilians in eastern Aleppo.

In the NEJM piece, Heisler and her colleagues recount some of the report’s major findings and the history of the Geneva Conventions dating back to 1864 that have protected hospitals and medical teams in wartime. They describe the particular effects of the barrel bombs dropped on hospitals and other civilian spaces, and the strategies that Aleppo’s health professionals use to treat those wounded by these bombs and provide medical care despite shortages of human and material resources.

Filled with explosives, shrapnel, nails, and oil and weighing 200 to 2000 pounds, barrel bombs are dropped from helicopters and break into thousands of fragments upon impact. The numerous wounds they cause require trauma care, and the remaining hospitals and teams struggle to provide needed treatment. No working MRI or CT scanners remain in Aleppo.

Because of this targeting, hospitals have literally had to move underground. When possible, as many operations as possible have been moved into basements. Most hospitals still functioning in Aleppo have been attacked repeatedly. One has been hit seven times.

Syria’s hospitals and medical teams aren’t the first to suffer direct and even deliberate hits, Heisler and her colleagues point out in NEJM. They note instances in Afghanistan, the Democratic Republic of Congo, Rwanda, Somalia, the former Yugoslavia, Iraq, Bahrain, Libya, Ukraine and Yemen.

But the attacks in Syria are the most egregious, they say, because there are so many. They call the targeting of medical care particularly troubling since the leader of the Syrian government, Bashar Al-Assad, is a physician by training.

Just as the international community stood up to Syria’s government over its use of chemical weapons, Heisler and her co-authors call for an international stance against violations of medical neutrality.

“The longer the international community fails to enforce humanitarian law, the greater the chance that these violations will become the ‘new normal’ in armed conflicts around the world, eroding the long-standing norm of medical neutrality,” they write. “Left unchecked, such attacks on medical care will become a standard weapon of war.”

Heisler expresses admiration for the medical professionals who have stood by their oath to provide care for patients, despite the risk to themselves. The new report tries to bring the improvisation, ingenuity and persistence they have shown in Aleppo, keeping even dialysis units running without any nephrologists, to the attention of the international medical community. She says, “They are true heroes. All the doctors we interviewed expressed their determination to stay as long as there are still civilians living in Aleppo who need medical care.”

But the conditions under which they work must not become the norm, Heisler says. “If this is not stopped in Syria we’re going to see more direct attacks on what we’ve thought of as sacrosanct. The right to provide and receive medical care is also under siege. ”

Heisler, a member of the U-M Institute for Healthcare Policy and Innovation, is a professor in the Division of General Medicine in the Department of Internal Medicine at the U-M Medical School, and holds a joint appointment in the School of Public Health. She is an associate director of the Global Reach program at the Medical School.