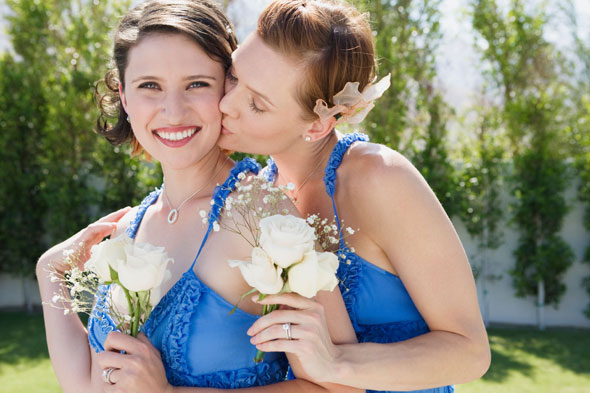 Although the recent U.S. Supreme Court ruling to legalize same-sex marriage was a victory for the gay community, same-sex couples continue to face challenges such as discrimination, stigma and lack of role models for their long-term relationships and marriages. Furthermore, same-sex female couples suffer breakups more often and more quickly than heterosexual couples. To help address these disparities, psychology researchers are testing a relationship education program to address the unique needs of female same-sex couples. Sarah Whitton, a University of Cincinnati associate professor of psychology, will lead a presentation as part of a Nov. 13 symposium at the Association for Behavioral and Cognitive Therapies (ABCT) 49th Annual Convention in Chicago.

Relationship education programs for heterosexual couples have shown effectiveness in improving relationships and their stability. However, the researchers explain that these programs contain considerable heterosexual bias and fail to address challenges for same-sex couples, such as discrimination and lack of social support, most notably lack of support from their own families.

Whitton says the program also includes newly developed material to address the unique needs of female same-sex couples. Couples are taught coping strategies for facing stigma and other issues that could impact the quality of their relationships, including issues surrounding children.

“Female same-sex couples also face issues we hadn’t found in our previous research in building such a program for male same-sex couples,” Whitton says “Child-related issues were prevalent, as some women had children from a previous heterosexual relationship and others were deciding as a couple how to create families through adoption or donor insemination.

“Another factor affecting female same-sex couples was an interest in maintaining emotional intimacy and being able to communicate about emotionally vulnerable topics,” Whitton says. “Therefore, the program teaches women strategies for protecting and enhancing their emotional connection.

The 10-hour program was tested on 38 couples in the Cincinnati and Denver area and required one six-hour session and two, 2-hour evening sessions. The program involved a lecture, the skill demonstration videos, practicing new skills with feedback from coaches, and group discussion.

At the end of the program, the researchers report that participating couples showed improvements in their positive communication skills and satisfaction with their relationships, compared to couples in a wait list control group.

The study done by University of Cincinnati.