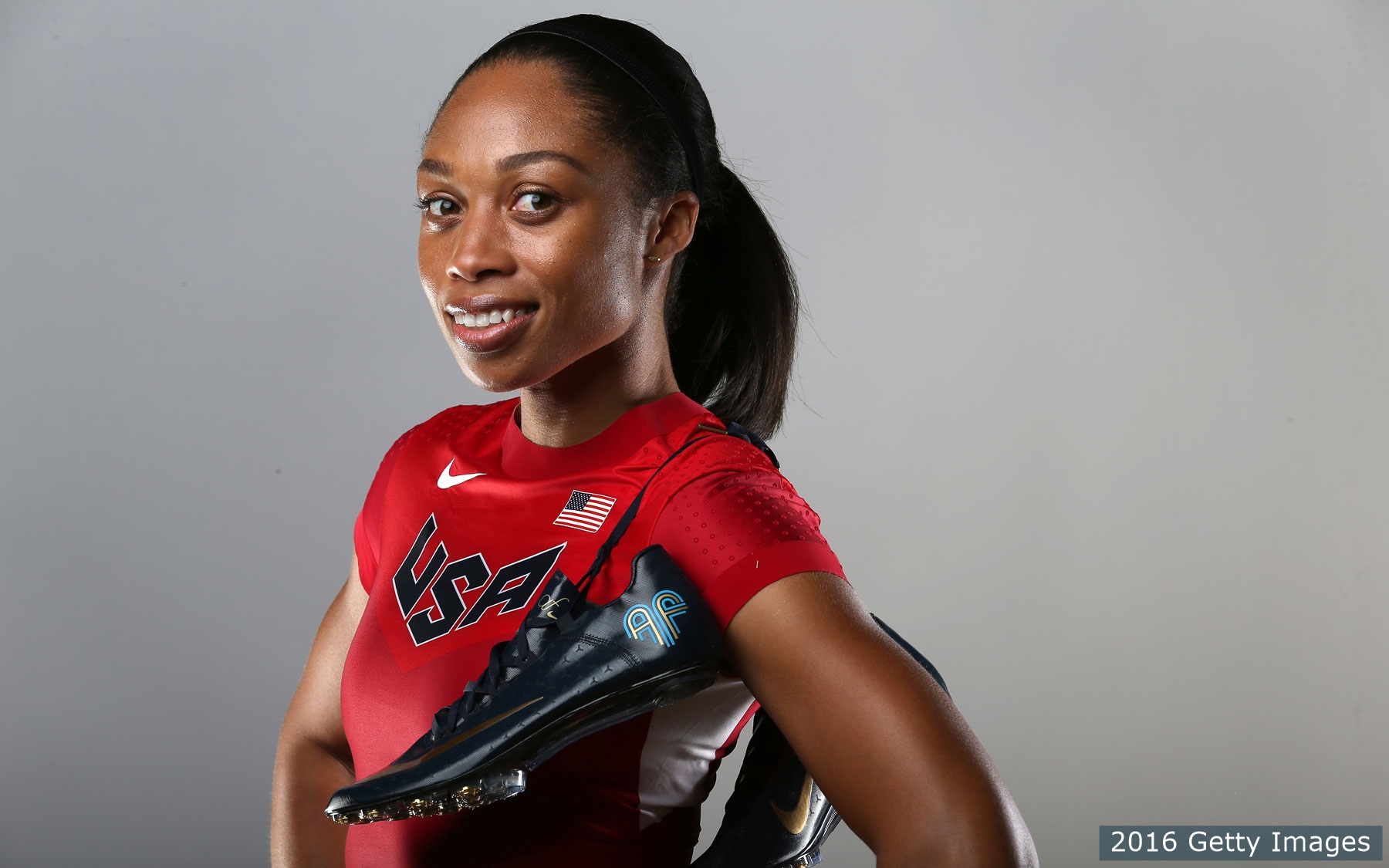 Allyson Felix- (USA) Runner 200 meter race and 4x400m relay: Allyson Michelle Felix was born November 18, 1985.She is a track and field sprint athlete, who competes internationally for the United States. Her specialty is the 200 meter race, winning the 2012 Olympic gold, two Olympic silver medals, and three world championship golds. She also competes at the 100 meter and the 400 meter distances, winning three Olympic gold medals as a member of the United States’ women’s relay teams, two at 4×400 meters and one as part of the world-record 4×100 meter team. Her three gold medals at the 2012 Summer Olympics are the most a female track athlete has won since 1988. As a participant in the US Anti-Doping Agency’s “Project Believe” program, Felix is
regularly tested to ensure that her body is free of performance-enhancing drugs.

Born and raised in California, Felix is a devout Christian and the daughter of Paul, an ordained minister and professor of New Testament at The Master’s Seminary in Sun Valley, California, and Marlean who is an elementary school teacher at Balboa Magnet Elementary. Her older brother Wes Felix is also a sprinter. Also running the 200, he was the USA Junior Champion in 2002 and the Pac 10 champion in 2003 and 2004 while running for USC. Wes now acts as the agent for his sister. Felix describes her running ability as a gift from God, “For me, my faith is the reason I run. I definitely feel I have this amazing gift that God has blessed me with, and it’s all about using it to the best of my ability.”

Allyson Felix attended Los Angeles Baptist High School in North Hills, California, where she was nicknamed “Chicken Legs” by her teammates, because the five-foot-six, 125-pound sprinter’s body had skinny legs despite her strength. But Felix’s slightness was at seeming odds with her speed on the track and strength in the gym, where, while still in high school, she deadlifted at least 270 pounds. She credits much of her success to her coach, Wes Smith.

Felix didn’t discover her gift until she tried out for track in the ninth grade. Just ten weeks after that first tryout, she finished ninth in the 200 at the CIF California State Meet. In the coming seasons, she became a five-time winner at the meet. In 2003 she was named the national girls’ “High School Athlete of the Year” by Track and Field News. As a senior, Felix finished second in the 200 at the US Indoor Track & Field Championships. A few months later, in front of 50,000 fans in Mexico City, she ran 22.11 seconds, the fastest in history for a high school girl, though it could not count as a World Junior record because there was no drug testing at the meet.

Felix graduated in 2003, making headlines by forgoing college eligibility to sign a professional contract with Adidas. Adidas paid her an undisclosed sum and picked up her college tuition at the University of Southern California. She has since graduated with a degree in elementary education.

At just 18, Felix finished as silver medalist in the 200 meters at the 2004 Summer Olympics, behind Veronica Campbell of Jamaica; in so doing, she set a World Junior record over 200 meters with her time of 22.18. Felix is coached by Bobby Kersee, husband and coach of Olympic champion and world record holding heptathlete Jackie Joyner-Kersee.

Felix became the youngest-ever gold medalist sprinter in the 200 meters at the World Championships in Helsinki in 2005 and then successfully defended her title at Osaka two years later. At Osaka, Felix caught Jamaican Veronica Campbell on the bend and surged down the straight to finish in 21.81 seconds, lowering her own season-leading time by a massive 0.37 seconds. After the final she stated that “I feel so good, I am so excited. I have been waiting for so long to run such a time, to run under 22 seconds. it has not been an easy road, but finally I managed,” said Felix. At that time, she addressed her future, saying, “My next goal is not the world record, but a gold in Beijing. I want to take it step by step. I might consider to do both – the 200 and the 400 meters – there.” In 2007, Felix became only the second female athlete; after Marita Koch in 1983 to win three gold medals at a single IAAF World Championships in Athletics.

Felix continues to lift and press heavy weights as part of her training routine. Currently Felix can leg press 700 lbs despite her size. Felix qualified for the 2008 Olympic Games during the 2008 Olympic trials in the 200 meters, but just missed qualifying for the 100 meter. However, at the 2008 Summer Olympics in Beijing, despite running her season’s best time in the 200 meters at 21.93, Felix again finished second to Campbell, who ran 21.74, the best time in the decade, to clinch the gold medal. Felix also ran the 4×400 meters relay as a member of the U.S. women’s team. The team finished first, giving Felix her first Olympic gold medal.

In the build up to the 2009 World Championships in Athletics Felix was part of a United States 4 x 100 m relay team that ran the fastest women’s sprint relay in twelve years.

Afterwards she said, “It’s really special to win a third world title. I wanted to do it in this stadium, represent my country and make Jesse Owens proud.” But Felix would rather have the one gold medal that is missing during the four years it has taken her to win three consecutive 200-meter titles at the biennial world championships. “I would love to trade my three world championships for your gold,” Felix jokingly said to Veronica Campbell-Brown of Jamaica at the medalists’ news conference. That is the 2008 Olympic gold medal in the 200, a race Felix, from Valencia, was heavily favored to win. She was distressed over finishing second to Campbell-Brown when it happened in Beijing and still obsessed about it a year later. “I don’t think I ever want to get over it,” Felix said. “I never want to be satisfied with losing.” At the same time she also commented, “I’m just grateful to have had success quickly, and sometimes I do have to pinch myself and realize all this has happened in not that much time.”

In 2010, Felix focused on running more 400 m races. Running the 200 m and the 400 m, she became the first person ever to win two IAAF Diamond League trophies in the same year. She continued her dominance by winning 21 races out of 22 starts, only losing to Veronica Campbell-Brown in New York. Incidentally, it was there that Brown set the WL time of 21.98 seconds. In 2011, Felix attended the ‘Great City Games’ held in the streets of Manchester on 15 May. It was there that she set the world leading time in the 200m, which was 22.12. She also ran a 10.89 in the second 100m of the race.

At the 2011 World Championships in Athletics, Felix participated in the 200 and 400 metre events, as well as the 4×100 and 4×400 metre relays. First up was the 400 metre event, she took second place in her heat in a time of 51.45. Felix then won her semi-final in a time of 50.36, ahead of rivals Novlene Williams-Mills and Antonina Krivoshapka. Felix was placed in lane 3 in the 400 metre final and finished second in a time of 49.59, 0.03 behind winner Amantle Montsho, who she had beaten throughout the season. In the 200 metre event, Felix was drawn in heat 3 and purposely placed second behind Dafne Schippers in a time of 22.71. In her semi-final, Felix again purposely finished second behind rival Veronica Campbell-Brown in a time of 22.67. In the final, Felix was drawn in lane 3 and finished third in an under-par time of 22.42 due to fatigue. Veronica Campbell-Brown won the gold and Carmelita Jeter won silver.

In the relay events, Felix ran the second leg in both the 4x100m & 4x400m against reputable athletes such as Kerron Stewart and Kelly-Ann Baptiste, and Davita Prendergast and Nicola Sanders respectively. Felix went on to claim gold in both events and attained world-leading times in both finals.

In 2012, Felix returned to the Olympic Trials, the schedule of events virtually requiring she choose between attempting to qualify in the 100m or 400m as her secondary event behind the 200m. She chose the 100m and advanced to the final, the top 3 finishers were to go on to the 2012 Summer Olympics as part of the 100m team. In the final, she ran 11.01, good enough for 3rd, but not without controversy. Officials ruled the race a tie after initially declaring the inexperienced Jeneba Tarmoh the winner. There was to be a run off for the 3rd spot between Tarmoh and Felix, but Tarmoh pulled out of the 100-meter runoff scheduled for Monday July 2, 2012, thus conceding the final 100m spot to Felix.

In the 200m final at the Olympic Trials, Felix ran a personal best and a meet record of 21.69, the third fastest time an American has ever run and the fourth fastest ever. Carmelita Jeter and Sanya Richards-Ross placed 2nd and 3rd respectively.

At the 2012 Summer Olympics Felix competed in 4 events: The 100m, 200m, 4x100m relay, and 4x400m relay, placing 5th in the 100m and winning gold in the other three, thus becoming the first American woman to win three golds in athletics at an Olympics since Florence Griffith-Joyner at the 1988 Summer Olympics. In her first final, the 100m, she placed 5th, running a personal best time of 10.89 seconds. In the 200m final; a race she lost at the 2008 Summer Olympics and 2004 Summer Olympics to Jamaican rival,

Felix took to the track again on August 10, 2012 as part of the women’s 4x100m relay team with Tianna Madison, Bianca Knight, and Carmelita Jeter. The foursome went on to smash the long held world record of 41.37, set by East Germany in October 1985. This record was set before Allyson Felix, Bianca Knight, or Tianna Madison were even born.

On the final night of athletics August 11, 2012, Felix ran the 2nd leg of the women’s 4 x 400m (in a leg time of 47.80), with DeeDee Trotter, Francena McCorory, and Sanya Richards-Ross, with the winning time being 3:16.87, the 3rd fastest time in Olympic history behind the Soviet Union and USA at the 1988 Summer Olympics, and the 5th fastest time overall.

Following the Olympics, Felix was a guest on The Tonight Show with Jay Leno on August 17, 2012. Felix also visited the set of ABC show Scandal, where she took photos with the cast and her Olympic medals. She had revealed she spent some of the time in her London hotel room watching Scandal when an NBC broadcaster talked to her after her 200m qualifier race on August 7.