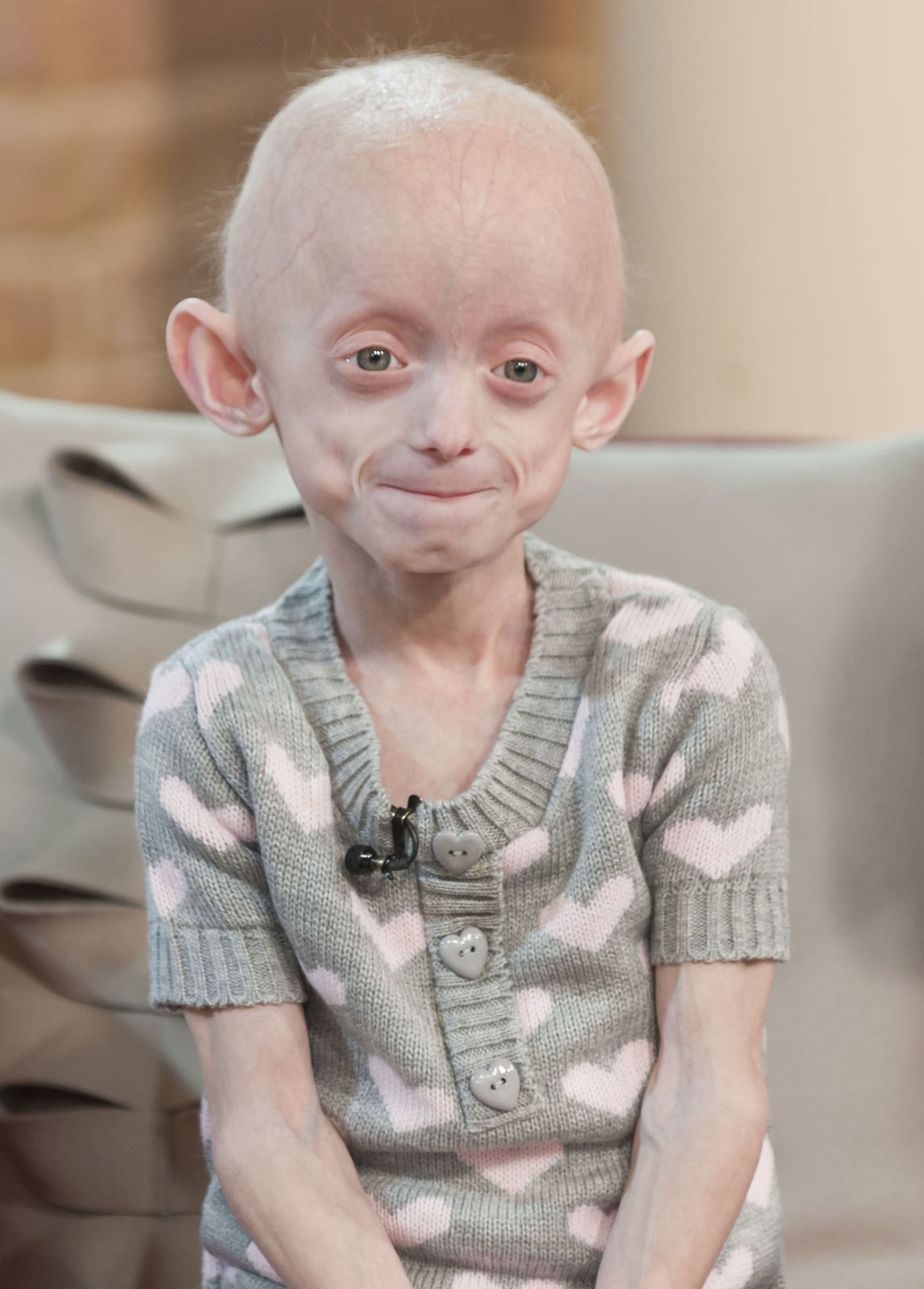 Progeria is a disease that causes children to age very prematurely and quickly. A baby with the genetic mutation is born a normal, healthy baby but symptoms normally appear when the child is 18-24 months. Children with progeria have bodies like those of elderly people, with wrinkled skin and poor eyesight and very few sufferers live beyond 13 years.

Progeria (Hutchinson-Gilford Progeria Syndrome, HGPS, Progeria syndrome) is an extremely rare genetic disease wherein symptoms resembling aspects of aging are manifested at a very early age. Progeria is one of several progeroid syndromes. The word progeria comes from the Greek words “pro” (p??), meaning “before” or “premature”, and “geras” (???a?), meaning “old age”. The disorder has a very low incident rate, occurring in an estimated 1 per 8 million live births. Those born with progeria typically live to their mid teens to early twenties. It is a genetic condition that occurs as a new mutation, and is rarely inherited. Although the term progeria applies strictly speaking to all diseases characterized by premature aging symptoms, and is often used as such, it is often applied specifically in reference to Hutchinson-Gilford Progeria Syndrome (HGPS).

Scientists are particularly interested in progeria because it might reveal clues about the normal process of aging. Progeria was first described in 1886 by Jonathan Hutchinson. It was also described independently in 1897 by Hastings Gilford. The condition was later named Hutchinson-Gilford Progeria Syndrome.

Children with progeria usually develop the first symptoms during their first few months. The earliest symptoms may include a failure to thrive and a localized scleroderma-like skin condition. As a child ages past infancy, additional conditions become apparent usually around 18–24 months. Limited growth, full-body alopecia, and a distinctive appearance (a small face with a shallow recessed jaw, and a pinched nose) are all characteristics of progeria. Signs and symptoms of this progressive disease tend to get worse as the child ages. Later, the condition causes wrinkled skin, atherosclerosis, kidney failure, loss of eyesight, hair loss, and cardiovascular problems. Scleroderma, a hardening and tightening of the skin on trunk and extremities of the body, is prevalent. People diagnosed with this disorder usually have small, fragile bodies, like those of elderly people. The face is usually wrinkled, with a larger head in relation to the body, a narrow face and a beak nose. Prominent scalp veins are noticeable (made more obvious by alopecia), as well as prominent eyes. Musculoskeletal degeneration causes loss of body fat and muscle, stiff joints, hip dislocations, and other symptoms generally absent in the non-elderly population. Individuals do usually retain normal mental and motor development.

Before the late 20th century, research on progeria yielded very little information about the syndrome. In 2003, the cause of progeria was discovered to be a point mutation in position 1824 of the LMNA gene, in which cytosine is replaced with thymine. This mutation causes transcription of the LMNA gene to stop too early, which results in the creation of an abnormally short mRNA transcript. This mRNA strand, when translated, yields an abnormal variant of the prelamin A protein whose farnesyl group cannot be removed. Because its farnesyl group cannot be removed, this abnormal protein, referred to as progerin, is permanently affixed to the nuclear rim, and therefore does not become part of the nuclear lamina. Without lamin A, the nuclear lamina is unable to provide the nuclear envelope with adequate structural support, causing it to take on an abnormal shape. Since the support that the nuclear lamina normally provides is necessary for the organizing of chromatin during mitosis, weakening of the nuclear lamina limits the ability of the cell to divide.

Progerin may also play a role in normal human aging, since its production is activated in senescent wildtype cells. Unlike “accelerated aging diseases” (such as Werner’s syndrome, Cockayne’s syndrome, or xeroderma pigmentosum), progeria is not caused by defective DNA repair. Because these diseases cause changes in different aspects of aging, but never in every aspect, they are often called “segmental progerias”.

Diagnosis is suspected according to signs and symptoms, such as skin changes, abnormal growth, and loss of hair. A genetic test for LMNA mutations can confirm the diagnosis of progeria.

No treatments have been proven effective. Most treatment focuses on reducing complications (such as cardiovascular disease) with heart bypass surgery or low-dose aspirin. Children may also benefit from a high-energy diet. Growth hormone treatment has been attempted. The use of morpholinos has also been attempted in order to reduce progerin production. Antisense Morpholino oligonucleotides specifically directed against the mutated exon 11–exon 12 junction in the mutated pre-mRNAs were used.

A type of anticancer drug, the farnesyltransferase inhibitors (FTIs), has been proposed, but their use has been mostly limited to animal models. A Phase II clinical trial using the FTI lonafarnib began in May 2007. In studies on the cells another anti-cancer drug, rapamycin, caused removal of progerin from the nuclear membrane through autophagy. It has been proved that pravastatin and zoledronate are effective drugs when it comes to the blocking of farnesyl group production. However, it is important to remember that no treatment is able to cure progeria.

Farnesyltransferase inhibitors (FTIs) are drugs which inhibit the activity of an enzyme needed in order to make a link between progerin proteins and farnesyl groups. This link generates the permanent attachment of the progerin to the nuclear rim. In progeria, cellular damage can be appreciated because that attachment takes place and the nucleus is not in a normal state. Lonafarnib is an FTI, which means it can avoid this link, so progerin can not remain attached to the nucleus rim and it now has a more normal state. The delivery of Lonafarnib is not approved by the US Food and Drug Administration (FDA). Therefore, it can only be used in certain clinical trials. Until the treatment of FTIs is implemented in progeria children we will not know its effects—which are positive in mice. 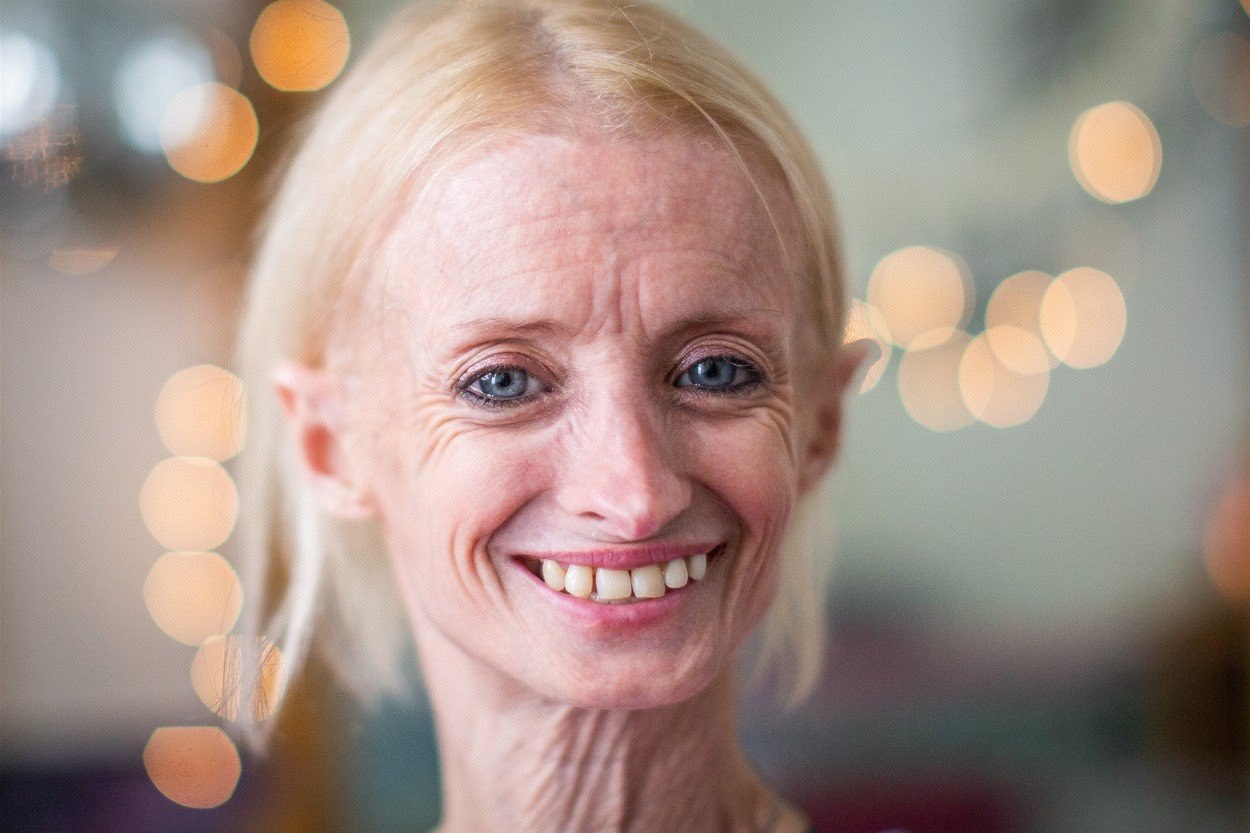 Pravastatin, traded as Pravachol or Selektine, is included in the family of statins. As well as zoledronate (also known as Zometa and Reclast, which is a bisphosphonate), its utility in HGPS is the prevention of farnesyl groups formation, which progerin needs to provoke the disease. Some animal trials have been realized using FTIs or a combination of pravastatin and zoledronate so as to observe whether they are capable of reversing abnormal nuclei. The results, obtained by blinded electron microscopic analysis and immunofluorescence microscopy, showed that nucleus abnormalities could be reversed in transgenic mice expressing progerin. The reversion was also observed in vivo—cultured cells from human subjects with progeria—due to the action of the pharmacs, which block protein prenylation (transfer of a farnesyl polypeptide to C-terminal cysteine).

The authors of that trial add, when it comes to the results, that: “They further suggest that skin biopsy may be useful to determine if protein farnesylation inhibitors are exerting effects in subjects with HGPS in clinical trials”. Unlike FTIs, pravastatin and zoledronate were approved by the U.S. FDA (in 2006 and 2001 respectively), although they are not sold as a treatment for progeria. Pravastatin is used to decrease cholesterol levels and zoledronate to prevent hypercalcaemia.

Rapamycin, also known as Sirolimus, is a macrolide. There are recent studies concerning rapamycin which conclude that it can minimize the phenotypic effects of progeria fibroblasts. Other observed consequences of its use are: abolishment of nuclear blebbing, degradation of progerin in affected cells and reduction of insoluble progerin aggregates formation. All these results do not come from any clinical trial, although it is believed that the treatment might benefit HGPS kids. A 2012 study showed that the cancer drug Lonafarnib can be used to treat progeria. It should always be taken in account that no treatment is delivered in order to cure Hutchinson-Gilford progeria syndrome; all potential drugs are in pre-clinical stages.

Several discoveries have been made that have led to greater understandings and perhaps eventual treatment for this disease. A 2003 report in Nature said that progeria may be a de novo dominant trait. It develops during cell division in a newly conceived zygote or in the gametes of one of the parents. It is caused by mutations in the LMNA (lamin A protein) gene on chromosome 1; the mutated form of lamin A is commonly known as progerin. One of the authors, Leslie Gordon, was a physician who did not know anything about progeria until her own son, Sam, was diagnosed at 21 months. Gordon and her husband, pediatrician Scott Berns, founded the Progeria Research Foundation.