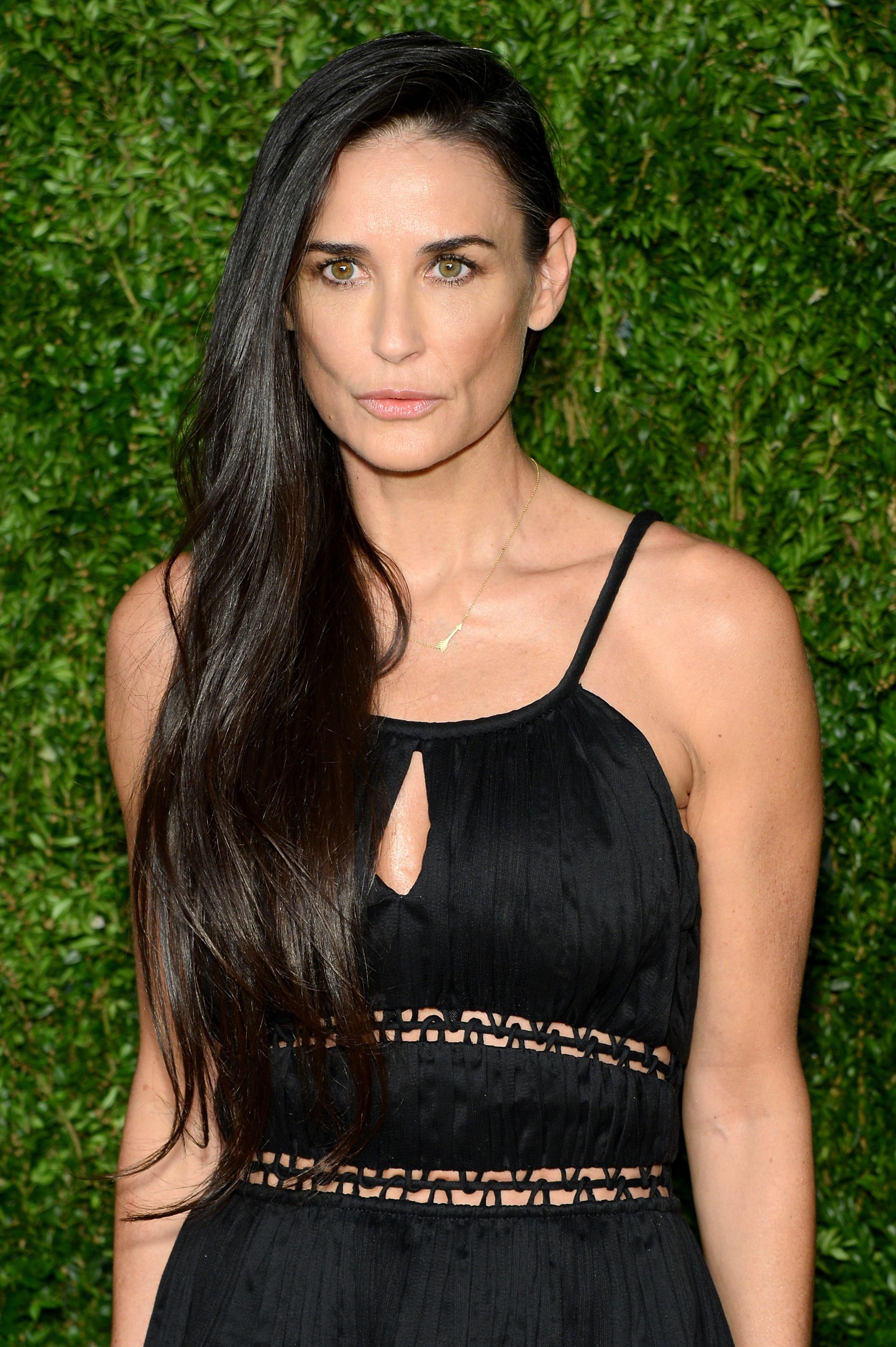 Demi Moore, Age 50 Years: Demi Guynes Kutcher was born on November 11, 1962. She is known professionally as Demi Moore, is an American actress, film producer, film director, former songwriter, and model. Moore dropped out of high school at age 16 to pursue an entertainment career, and posed for a nude pictorial in Oui magazine in 1980. After making her film debut in 1981, she appeared on the soap opera General Hospital and subsequently gained attention for her roles in Blame It on Rio and St. Elmo’s Fire . Her first film to become both a critical and commercial hit was About Last Night., which established her as a Hollywood star.

In 1990, Moore starred in Ghost, which was the highest-grossing film of that year and brought her a Golden Globe nomination. She had a string of additional box-office successes over the early 1990s with A Few Good Men , Indecent Proposal , and Disclosure . In 1996, Moore became the highest-paid actress in film history when she was paid a then-unprecedented salary of $12.5 million to star in Striptease. The high-profile disappointment of that film as well as her next, G.I. Jane , was followed by a lengthy hiatus and significant downturn in Moore’s acting career, although she has remained a subject of substantial media interest during the years since.

Moore took her professional name from her first husband, musician Freddy Moore, and is the mother of three daughters from her second marriage to actor Bruce Willis. She married her third husband, actor Ashton Kutcher, in 2005, and separated from him in November 2011.

Moore was born in Roswell, New Mexico. Prior to Moore’s birth, her biological father, Air Force man Charles Harmon, Sr.left her mother, Virginia , after a two-month marriage. When Moore was three months old, her mother married Dan Guynes, a newspaper advertising salesman who frequently changed jobs; as a result, the family moved a great many times. Moore said in 1991, “My dad was Dan Guynes. He raised me. There is a man who would be considered my biological father who I don’t really have a relationship with.” Moore learned of him at age 13, when she found her mother and stepfather’s marriage certificate and inquired about the circumstances since “I saw my parents were married in February 1963. I was born in ’62.” Dan Guynes committed suicide in October 1980 at age 37, two years after divorcing Moore’s mother. Moore’s biological father appeared on Inside Edition in 1995, making an appeal to see his grandchildren. Virginia Guynes had a long record of arrests for crimes, including drunk driving and arson. Moore broke off contact with her in 1990, when Guynes walked away from a rehab stay Moore had paid for at the Hazelden Foundation in Minnesota. Guynes later embarrassed her daughter by posing nude for the low-end magazine High Society in 1993, where she spoofed Moore’s controversial Vanity Fair pregnancy and bodypaint covers, and parodied her love scene from the film Ghost. Moore and Guynes briefly reconciled shortly before Guynes died of cancer in July 1998 at age 54.

In August 1991, Moore appeared nude on the cover of Vanity Fair under the title More Demi Moore. Annie Leibovitz shot the picture while Moore was seven months pregnant with her daughter Scout LaRue, intending to portray “anti-Hollywood, anti-glitz” attitude. The cover sparked an intense controversy for Vanity Fair and Moore. It was widely discussed on television, radio, and in newspaper articles.The frankness of Leibovitz’s portrayal of a pregnant sex symbol led to divided opinions, ranging from complaints of sexual objectification to celebrations of the photograph as a symbol of empowerment.

The photograph was subject to numerous parodies, including the Spy magazine version which placed Moore’s then-husband Bruce Willis’ head on her body. In Leibovitz v. Paramount Pictures Corp., Leibovitz sued over one parody featuring Leslie Nielsen, made to promote the 1994 film Naked Gun 33⅓: The Final Insult. In the parody, the model’s body was attached to what is described as “the guilty and smirking face” of Nielsen. The teaser said “Due this March”. The case was dismissed in 1996 because the parody relied “for its comic effect on the contrast between the original”. In November 2009, the Moroccan magazine Femmes du Maroc emulated the infamous pose with Moroccan news reporter Nadia Larguet, causing controversy in the majority Muslim nation.

Moore was a founding “celebrity investor” in the Planet Hollywood chain of international theme restaurants modeled after the Hard Rock Cafe and launched in New York on October 22, 1991 along with Sylvester Stallone, Arnold Schwarzenegger, and former husband Bruce Willis. She was the executive producer of all three of the films in the successful Austin Powers franchise, as well as an interview series for the Lifetime network called The Conversation.

She is a follower of Philip Berg’s Kabbalah Centre religion, and initiated Kutcher into the faith, having said that she “didn’t grow up Jewish, but … would say that she has been more exposed to the deeper meanings of particular rituals than any of her friends that did.”
According to The New York Times, Moore is “the world’s most high-profile doll collector,” and among her favorites is the Gene Marshall fashion doll. At one point, Moore kept a separate residence to house her 2,000 dolls.

While she landed on PETA’s Worst-Dressed List in 2009 for wearing fur two years later she supported the group’s efforts to ban circus workers’ use of bullhooks on elephants.

In 2009 Moore and Kutcher launched The Demi and Ashton Foundation (DNA), a nonprofit, non-governmental organization directed towards fighting child sexual slavery. Its first campaign was “Real Men Don’t Buy Girls.” In November 2012, the foundation said it was announcing “a new name and refined mission” as Thorn, which aimed “to disrupt and deflate the predatory behavior of those who abuse and traffic children, solicit sex with children or create and share child pornography.”